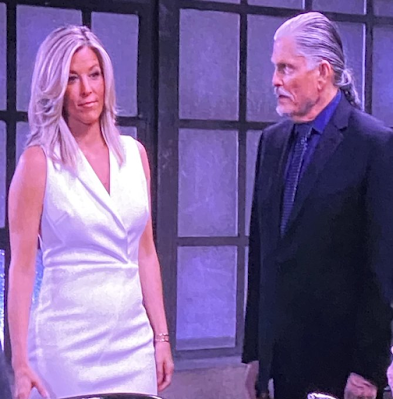 So I watched. And...it was good! I'm writing it's own little post because I have a few questions for everyone.

First off, Nixon Falls. WHY didn't they have Sonny and Nina just kiss? It would have been perfect. She could keep flashing back to his dimples and lips while in PC. Where does her heart lie? Also, Maurice Benard tweeted that he knew change was hard but he's played Sonny for 25 years and welcomes the change. Also loves working with Cynthia. So.... I kinda get it. It's not the best story but I get it. Plus, Trina got spaghetti sauce out of it so??!!

Next up: DID Cam shoot Jason? I thought he did. LOOKS like he did but Cam sure isn't acting like he did. SO...was there someone else in there that shot Jason that was hidden? Like Peter? Or one of the goon-guys? Will they think Cam shot the bad guy and not Jason? Will they have the real footage of the parking garage after Spinelli messed with it?? Oh lordy. Much to unpack.

The Blood Transfusion: I'm going to write about this in the blog!! You know I am!! "How many times have you two bled for each other" ? Britt asks. Loved the operation scene actually. Looked pretty real. Notice how her hand shook AFTER the whole thing? That's real life. Her adrenaline finally wore off. Also, I didn't mind Brick being there. Who AM I??

Finally, Carly was perfect in her Mobular Seat. ALL in white... sitting with the Five Families and leaving Cyrus gobsmacked. THIS is the Carly I want. Right there.

See ya at 3 after GH today!