OH MY GOSH. I watched yesterday's show and..boy do I have a LOT to say. Why? You'll see in Sunday Surgery. There was SO MUCH I didn't like. SO MUCH. Sam. Sasha. Brando. all eyerolls. 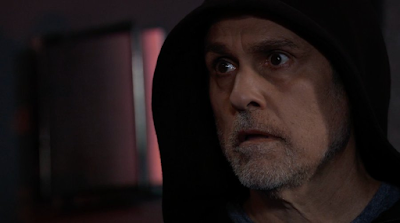 Sonny is setting off the alarm and trashing Elijah's office. He takes money and tries to download the computer. WITH THE ALARM going offf He stays there FOREVER. Finally the police lights show. Will he be caught!!?

Nina won't kiss Elijah. Then, he gets a message his office is broken into. HE goes to leave and Nina pleads to go with him. They get there, Sonny is gone. Eli doesn't know why anyone would rob him.

Sonny is back at the Tan-O and Phyllis catches him putting money IN the petty cash. Says he doesn't have to do that.
Then, Nina goes back to the office after Eli is gone to go through the computer too. It's so weird. Oh, she dropped an earring on the way out so I guess if she's caught she can say she's looking for it?  This is SO DUMB

Cyrus talks to Sasha at the Metro. She tells him to buzz off. For some reason after talking to Lucy, Gladys is going to think Cyrus is the father of the baby? Huh?

Carly calls over Diane and wants her to do a new Will. Diane says she doesn't want to know what Carly is up to "business" wise.

Ava drops off Avery for a sleep over because she misses her sisters. Carly is like: Gulp LOL What will she tell AVA? Oh, it's ok if she stays here! Carly knows Ava is there for another reason. Ava tells her she knows Carly was at the five families and she has a new appreciation for Carly. She will help her however she can.

Brook Lynn has to go to the house in Beecher's Corners and stock up. Valentin shows up tho. They talk, she sneaks out. Then, she sneaks back in (kinda, you won't believe it) and they banter.

Maxie is meeting with her new OBGYN...Peter is lurking. She's afraid he heard stuff while she was on the phone. She 'introduces' the nurse she 'hired' to Peter. Then she goes into the exam room. Brook Lynn comes in and she gives her the key to the hideout. Brook leaves. The doctor tells Maxie everything is great. Then Peter comes in.

Val wants to move into the Q house.

Maxie's doctor tells her she could be induced today!

Gladys tells Cyrus he's going to be a Daddy!

Nina gets caught by Eli in the office.

By kdmask - May 14, 2021
Email ThisBlogThis!Share to TwitterShare to FacebookShare to Pinterest