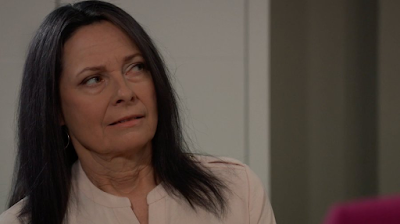 This week is a mess for me!! I'm glad I'm able to be here today. Just a lot going on. How about you all? Doing well? Good weather where you are (finally??)

We see someone go down the stairs and it says... "Seven Hours Earlier"....oh mystery !

Maxie and Spinelli talk about her situation. She's sad. She says it's because of Sean dying. She says she's afraid she won't get to hold her baby..(but because it's high-risk).

Britt and Jason. She's trying to meditate in the woods. He stares at her. They talk about nature and camping. I guess she's waiting for her test results. Then he calms her down with visualization exercises. They almost kiss but the phone rings. Results are ready.

Nina and Sonny talking about Eli. zzzzzzzzz. Eli calls and asks Nina out. She says yes. Sonny isn't happy. She says she's going to the BBQ and he should look around his apartment. Sonny says it's too dangerous. Nina says it's not. Yada yada. Sonny goes to take a beer order and Nina leaves.

Sasha is at GH.. Brando wonders if she's ok. Peter sees them walk out together.

Carly puts Gladys up at the Metro. Diane comes in and wants to hear what she is going to say to the police.  Gladys wants to make sure she won't go to jail if she changes her story. Diane leaves for the courthouse. Carly has to go downstairs at the Metro to take care of something. She tells the guard to watch Gladys, don't let her leave. Gladys orders room service.

Cyrus wants a favor from Peter.  HE wants him to do a story on Laura and Carly being in cahoots together and that Carly is the head of the mob now. Cy gets a phone call from the courthouse that Gladys is changing her story about Jason shooting Franco. Peter is mad. Cyrus is going to find Brando to make him stop his mother. Peter says he saw Brando going to have a "chat" with Sasha.

Peter and Cyrus have Gladys tied up. Brando is summoned.

Britt is told she has the Huntington's marker

Nina is with Eli who knows she and Sonny broke into his office.

The person thrown downstairs is shown again, looks like Peter

By kdmask - May 24, 2021
Email ThisBlogThis!Share to TwitterShare to FacebookShare to Pinterest