So, I saw yesterday Maxie didn't tell Spin the plan.

JaBritt ended up in a cool looking cabin!!  Kissy Kissy

There was breaking news --mass shooting San Jose Rail Yard. So the show was a bit delayed. 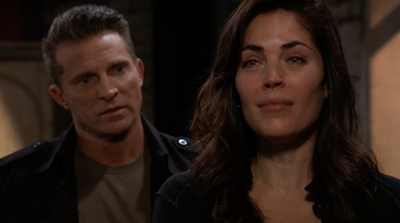 JaBritt--making out and gonna make DA LOVE. UM, HOLY..I guess social distancing is OVER. Holy heck!! HOT. I mean, like wow. Haven't seen Steve Burton like this in a long time.  Whew. Britt is like: Hmmm, didn't think that's how THIS day would end!

Spin and Carly find Gladys using her burner phone. She sends gunmen out to go get her.

Cyrus tells Brando to shoot Gladys, he turns the gun on Cyrus and it's not loaded. Cyrus tells him he knew he was Sonny's plant from the start. Pulls a gun on him. Brando says goodbye to his mother. Cy is ready to shoot and a laser points on him...guys break in (I think Carly's guys) and they start shooting.  Cyrus escapes. Gladys is hit in the shoulder and he takes her to GH. Now he's desperate to find Sasha. Carly comes in and says she took care of it and Sasha is being guarded.

Ava is looking for Cyrus at GH. Nikolas finds her. They talk about making Cyrus believe she's on his side.

Spinelli gets ready to leave his hideout thing and someone comes upon him...

Maxie is making plans and packing to go to Beecher's Corners.

Peter makes sure that the Nurse is going to get ready to kidnap Maxie with him. NEXT time we see Maxie she's waking up in a cabin with Chloe! Chloe drugged her! She says Maxie will have the baby tonight. She's going to inject her to go into labor. Maxie tries to tell Chloe Peter will kill her but she doesn't believe it.  Maxie ends up throwing hot tea is Chloe's eyes!! She really IS having pains tho!! She gets the fire poker but Chloe gets up and has the needle.

Nina and Eli... Eli wants to know how she knows MikeSon. He's screaming at her..threatens her and then Sonny hits Elias on the head hard with a giant log. LOL the cops come and Nina tells them she found the papers on Eli and they prove he was behind all the robberies in Nixon Falls.  The bank statements should convict them.  Nina and Sonny kiss. She freaks and leaves.

Chase, Michael and Willow. zzzzzzzzzz Brook Lynn tells Michael that Chase will be able to tell that he and Willow are in wub.

Brook Lynn gets ready to leave to go to Beecher's Corners. She gets rid of Uri by saying the crib is broken. Shes' out the door and VALENTIN comes in!! He forgot to give Charlotte her science book! WHOOPS! They argue about her leaving to go see her friend "Celeste" for a baby shower. She bamboozles him and finally sneaks out.

END: Carly gets a call from Cyrus; he has Spinelli!

By kdmask - May 26, 2021
Email ThisBlogThis!Share to TwitterShare to FacebookShare to Pinterest