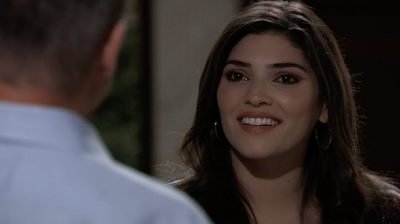 Monday!! So it should be a Friday show?

Jason and Britt are in a BARN. SO soapy. :eyeroll: it's one of the Cassadine's at some nature preserve. Britt and he spar. She goes and gets coffee.

Corintos Kitchen....Moss is out. Joss and Carly talking about the tournament. Joss thinks she selfish (true)> Carly poo-poos her. Then sends her up to check on Donna when Jason calls. She's mad Sam led Dante to the hide out.

Tan-O.  Sonny found out Elijah paid one of the robber's bail. Tells Nina Eli is a bad guy. BUT! Nina is going out to dinner with him. She wants to find out what his motives are.

Peter at the Metro with Cyrus. Oh, Pete doesn't care if Cyrus kills Britt. Nope. Cyrus calls him and idiot! Tells him he will be dead "within a week". I wish.

Peter meets the nurse. Oh, he kills her and sends Maxie another nurse. Kimberly Brown, that new lady from Guiding Light.

Ned is home. Brook Lynn is there. He's proud of her.  He sings to her unborn baby. Olivia watches ...tears up. Ned makes her a mix tape. He and Olivia go to make lunch together.

Maxie has Sam over. Wants her to find Jason so he can return Brit. "Tell him something is wrong with your kids" LOL! Sam's like NOPE. She wants Dante to help. Maxie says no, tells her to leave.

By kdmask - May 10, 2021
Email ThisBlogThis!Share to TwitterShare to FacebookShare to Pinterest