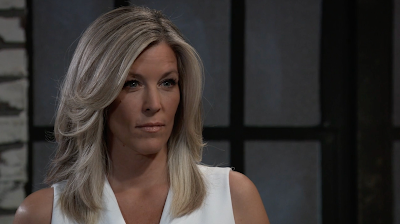 I watched the end of Tuesday's episode and we didn't see Cam actually shoot the gun. Jason gets shot, and Cam was aiming but it could have been anyone hiding in the parking lot. Just saying.

Carly brings her "guys" into the meeting. Says she's sitting in for Sonny. Ms. Wu asks if she's taking over her late husband's territory.  Great scenes. Come to find out, Carly had a shipment of Cyrus' destroyed in the harbor. He says "Act of War" . Other mob bosses are impressed. They all accept Carly into the fold. Cy is pissed. Oh Carly is gonna be MobHead!!

Jason wants to get dressed and get to Carly. Britt tries to talk him out of it. He can't go, too weak. They wait for the blood to come.

Cam, Scotty and Liz at the interrogation room at the PCPD. Cam swears he didn't do it. He goes to get booked. Liz kinda yells at Jordan. Jordan is like: Um, it's my job. She reviews the footage and sees the bullet comes from behind Cameron, he didn't shoot him. He's free to go.

Jax and Joss are at Jax's house. zzzzzzzzzz. Dante comes by looking for Carly.  Joss and Jax are wondering what she's up to.

Nina and Sonny. Sonny fixes her a Tan-O Tini LOL ... Elijah wants to take her out to the fanciest place in town.  Nina is going to 'find a place' in Nixon Falls. Welp.

Dante finds Carly at the meeting place for the 5 families. Asks about Jason she says she knows nothing.

Eli pays off some shady guy and Sonny sees it.

Someone is coming in the cabin, Jason gets his gun out

Cameron hears it was Peter August that killed Franco