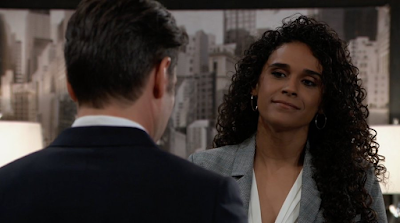 Dante is showered and shaved and back on the force. He looks amaze. Jordan and he talk about the Jason case and the fact he ran in after Brit so she's probably not a hostage. He heads out to find them.

Brit tells Jason she has Huntington's Disease ...because she has a 5050 chance from her Dad. Jason asks if she got the genetic testing. She says she lied to her mother and said she did and it was negative but she didn't. She's too scared. SO it might NOT be Huntington's. Hmmm. She and Jason talk about the progression of the disease. She's afraid she'll get the psych problems her father ended up getting. She cries and says she's scared.

Sam is going to try to get Jason/Brit some passports. She's in Elmira. That's Southern Tier NY .. Wubsy's old stomping grounds.  OMG she sees Dante. He's there to find Jason. Talking to the gas station guy. Guy says he's not sure if he say Britt.

Jax and Carly talking to Joss. "Coastal basically isn't an option" pick somewhere else LOL! Joss is pouting. Carly says she has other options and Jax tells her she can always transfer later. Then Carly takes a call--it's mobular related. Jax gets a pissy face on LOL!! She says "FINE, I guess I'll go to PCU"... :eyeroll: Hates it. Jax and Carly are happy.

Ava and Nikolas. Talking about Cyrus.

Alexis and Shawn..Shawn tells her he doesn't want to go to his parole hearing. He tells her why he pled guilty. He didn't take the deal to turn evidence on Sonny.

Curtis and Portia talk about the club opening. Trina is watching them from a table at the Metro (they are at the bar)..she's like EWWWWWWW. Portia and he talk about meeting and giggle.   Ava comes over to talk to her.

Joss and Trina will room together

By kdmask - May 12, 2021
Email ThisBlogThis!Share to TwitterShare to FacebookShare to Pinterest