So how did you like Scotty and Dr. O yesterday? Oh they tickled me! woot!  Britt and Franco would be Step Siblings. heehee!!

Franco goes to see Dr. O. She realizes they have to get Drew's memories out of his head to trap Peter.  She thinks Kevin should hypnotize him to get the memories out. He goes to see Kevin.

Maxie isn't happy that Peter published his article. She thinks it started bad things against Franco. Peter says he had to to protect people. Maxie remembers Nathan.

Martin gets Alexis out on bail..she's going to go DRINK! LOL Jordan walks in. Jordan wants to talk to Alexis as a friend. Says she told Molly and TJ. ALexis thinks she might plead guilty. Jordan leaves. Marty says No way will he let her plead guilty because unlike her, he's proud to be  a lawyer. 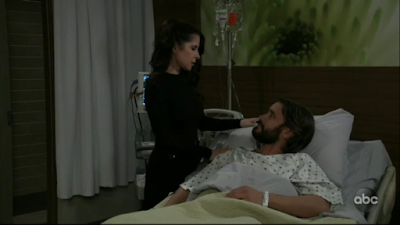 Dante wakes up to Sam in the room. Sam tells him what happened.  He's not sure why he saved Franco . Anna asks him too. He flashes back to the clicking pen that Dr. O did. He says he has no idea. Anna apologizes and leaves. Then Sam and Dante have a fun FLIRT SESSION AWW SO CUTE. Alexis barges in and says she wants to make sure they are both ok.  Dante says he knows Alexis is a decent person who just made a mistake. Wants Sam and her to make up. Alexis says it's too late, she's done too much damage..and leaves. Sam catches up with her in the elevator!

Laura and Cyrus. Cyrus talks to her about Dante. She says they aren't family. He gives her an envelope to look at. It's a photo of him as a kid with his family. He tells her they are all family. He  flesh and blood. He leaves the photo with her and she looks at it again.  Martin comes over to sit with her. He says she has to help him find his mother.

Franco finds Kevin at GH tells him that Peter's voice is in his head talking about Drew..and he needs help. Anna overhears it all! She's staring and not sure what to make of it. She thinks it's the tumor. Liz says no, we saw a specialist. Anna tells him that Dante saw that doctor and so did Dr. O. Franco is like: Oh, really? Huh..imagine that. Liz pulls him aside and asks if he's seen Lesil. He says YEP.

Dr. O is in a red wig, goes in to see Dante. She clicks her pen.

Cyrus tells Jordan that she can tell Jason that he'll let Taggert go free in exchange for his mother.

Liz thinks they should treat the tumor before getting the memories out.

people moved all over the canvas today! loved it

By kdmask - February 02, 2021
Email ThisBlogThis!Share to TwitterShare to FacebookShare to Pinterest