Britt: IN prison where you can't shoot her...giggle.  Britt denies knowing where Lesil is. She taunts Anna and says why didn't the WSB just tell you? Don't they trust you anymore??

Franco finds out the side effects from radiation from Terry.  They run into Finn they tell him they aren't coming to the funeral because of Peter. Franco says he knows who gave him access to his files. Liz goes to confront Britt. Britt says it was not her --but she was indirectly involved. Apologizes. 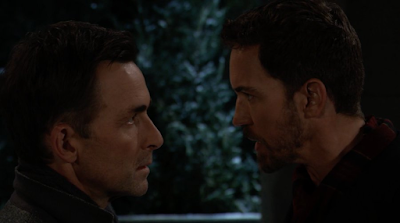 Valentin is playing with Peter: "Your life is about to unravel" He gets Peter to admit that he framed Lesil Obrect. AND he admits to having Drew Kane killed. And... that stupid Val is going to keep his secret to protect Anna and Maxie's hearts. Oy vey!!

Sonny answers the phone. Nina is like "Who? What name"? What's your last name?? He asks her if she wants delivery. She wants to talk to Phyllis. Tells Phyllis she found her daughter. She wants Phil to look at the photos. Phyllis can't come tho. She hangs up, sad. Ava comes in...Nina tells her about Nelle being her daughter. Ava said she was smart and such but Nelle was really evil and violent. Nina says that if Nelle had a mama then it would be ok. Nina says she's going to be with Wiley as much as possible.  Then Phyllis calls her back.

Joss and Carly visit Mike and Morgan. Tell them tomorrow is Sonny's funeral.  Joss is mad Nelle is buried in the same graveyard  as their family. Carly tells Joss that Nina was Nelle's mama. Joss is like: oh, grosssss LOL .

Someone is looking at "Alexandria Merrick's Last Will and Testament"...and there's a flashdrive the hands put in an envelope-- with a card that says "Peter"....they have a wedding ring on and it's coming from Budapest Hungary..IS THAT DIMITRI MERRICK? oooooooooo lordy if it is!!! Maybe it's just representing him?

By kdmask - February 08, 2021
Email ThisBlogThis!Share to TwitterShare to FacebookShare to Pinterest