I'm hoping for Fireworks today with Nina!! She says to Carly and Jax: I know WHAT YOU DID TO MY DAUGHTER!! HA Diane and Jason are like: GULP. She yells and says Carly knew Nelle was rotting in the river and said nothing. They go around and around. Nina says Carly has the whole town enable her. Carly says Nina cut Avery out of Ava's womb. yada yada.  Best line is Nina to Jax "You're a liar too...you just do it with a TAN and a SMILE" lolahahahaha!

Diane goes back to Sonny's with Carly, Jax and Jason. She's pissed she doesn't know the whole story.

Cyrus and Britt. He is having board meeting about a new pain management drug he's developing. Wants FDA approval asap. The board is ready to say yes when Lesley walks in and objects! 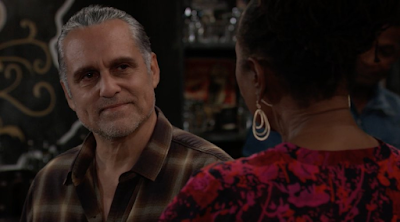 SONNY...and Phyllis is home. He tells her about his dream. Snooze. Why did she even GO to Port Charles? I mean, she didn't even see the Sonny funeral stuff. ugh. There's a customer drinking whiskey and Sonny says he can't drive. Guy hands him his car keys.

Jordan (old Jordan is back) and Curtis. Curtis doesn't want to work on the marriage. OMG cut him LOOSE! They talk, and ..talk. He wants to separate for awhile. Jordan cries.

Sam and Dante talk.  She says she free of Jason's life.

Britt calls Jason about the drug thing Cyrus is doing.

Lesley goes to see Monica for help dealing with Cyrus at the hospital.

Nina goes to Jordan about evidence in the Nelle death.

The Tan-O Bar is all smashed up and everything is broken. :eyeroll: whatever.

We all know Nina will find Sonny and he'll think she's the one in his dream...yada yada.

By kdmask - February 17, 2021
Email ThisBlogThis!Share to TwitterShare to FacebookShare to Pinterest