Oh Chase/Finn DNA! GO Anna....Chases' Dad COULD be his grandpa? LOL Not that it would matter. I mean, the other guy RAISED him..so??  I guess it would just be to break Chases' heart. 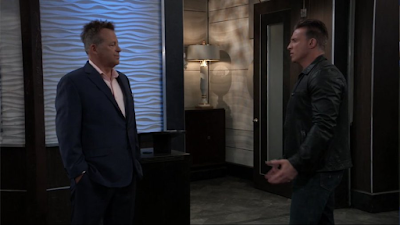 Scotty being mean to Jason! YEAH!! 'Sonny lived by the sword so he died--in a New Jersey River" ahahaahaa.

AHAHAHA Brit to Maxie "Marry someone else" hahhaa . The Maxie, Nina and Britt friendship is cute.

Nina and Jax. She hates him and I'm here for it. She says he picked Carly instead of telling her the truth.  She just lays into him.

Jason and Carly. Jason says whatever they are doing better be enough for Martin. They then tell Michael why they have to have the funeral right now. Carly's just crying. LORD there's no body so.. ugh.

Martin gets a package from Jason ..it's a cell phone to his mama. He calls and talks to her.

Sonny and Phyllis.. he feels better after taking meds. She thinks they should look at the posters of missing people at the Trooper's station WHAT IS THIS? Maybe he time traveled.  I mean, WTF. Computers??? Anyway he says he'll stay and work for them but he has to be able to make "Da Sauce" ..:eyeroll:

Finn runs the DNA test. Jackie comes up to him in GH and they go into his office. She says it could ruin Harry's life if he goes through with the testing.  They yack about it.

Britt and Peter are at Nathan's grave. He says he loves Maxie and yada yada. Oh he overhears Brit say "Mother was right".  Then he is dissing Nathan at his grave. Overacting. Oh! Valentin overhears him!

Valentin and Anna talking about Peter and Drew and memories. Valentin is trying to find out more. He thinks Peter had mind mapping connections. Anna just stands around and tears up.

Funeral talk about Sonny. Chase comes over to talk to Michael about it. He's also talking to Willow about how much he misses her.

END: OH Nina calls the bar looking for Phyllis and GETS SONNY ON THE PHONE AND HE SAYS IT'S MIKE AT THE TAN-O!! AHAHAHHAA OMG

By kdmask - February 05, 2021
Email ThisBlogThis!Share to TwitterShare to FacebookShare to Pinterest