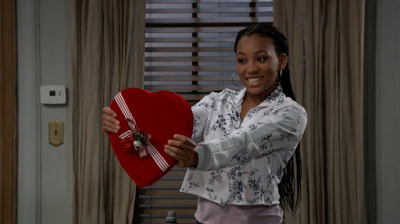 So I Guess TJ and Molly are all of a sudden getting "Committed" today...WHY in a law office for godsakes? Why no where fun? I feel like I missed a bunch of episodes or something. She's there with Krissy waiting for TJ. NO ONE Else is invited!! Because they want it 'simple' and just them?? WE WAITED HOW MANY YEARS? FOR WHAT? TJ is running late and the lady at the office says he has to hurry up because she's closing.

Brando is shot in the leg. We know who did this. Jordan wants to know too but he won't talk.  Jason shot him to put him out of commission for a bit so Cyrus won't...?? I don't even know.

Franco and Liz are at The PC Grille..Franco feels sick. His hair is falling out! They leave.

Ava and Nick support Liz about Franco. Maybe Ava and Liz will be friendly? Ava gets a box from Nik. It's a Roach! LOL..he has no idea how it got in there. Spencer?

Britt goes to visit BRAD IN THE HOSPITAL!! omg..it was too cute. They are doing bags for the sick kids for Valentine's day. Britt got him out of jail by saying he needed a follow up appointment.  He takes her had and wonders why it's shaking.

Felix and Lucas are on. No where to go. Felix wants to know if Lucas wants to go for a drink.  JUST AS FRIENDS.

SO..Willow and Chase are going out for Valentine's Day--and so are Michael and Sasha and get this--TO THE SAME PLACE. :eyeroll: Anyway, Michael switches his reservations to The Metro from the PC Grille.

Curtis and Portia go to the 'new club' for his undercover detective gig. They are getting along well.

Joss and Trina go to visit Cam. He's home watching the kids. They do Valentine's stuff.  Joss finds an acceptance letter from Stanford in Cam's backpack.

By kdmask - February 19, 2021
Email ThisBlogThis!Share to TwitterShare to FacebookShare to Pinterest