Well, if I thought for one half of one second that GH would get any less mobular under yet more new writers, I was wrong. You can tell Guza's not at the helm but I can still here him slow clapping in the background every time someone is forced on their knees with a gun to their head.
This was also the "All Hail Sonny" week in so many ways, you'll want to hurl yourself out the window. Just over the top and ridiculous.

I am doing things differently again today because I'm sure you get tired of the same ol' same ol'...this blog will be done in chapter style.

Breakfast is going to be some pasta and red wine. It's that kinda blog. (no birds were killed this week however, I guess we can be happy).

Ya'll knew we were in Ecuador because of the Bullfighing posters, right? There they were, pasted up  on the parking lot  wall so there was no mistake! Well, you see, the plane landed and Paul (having got out of his handcuffs) made a 39 second "arrest warrant" for Anna that managed to travel all the way down there. Hell, Homeland Security doesn't move that fast!

That left Anna on board while Sonny, oh our hero of a mobby-man Sonny, had to go out and face Carlos himself. He happened to find him in the first place he looked: a Church! Must be fate, no? Carlos was all decked out in frock and gun. Pointed right at our St. Sonny.

Naw, you didn't think that was gonna last long, did ya? Well,  after Carlos got Sonny on his knees, Sonny made a move and got the gun. All was right with the world!! Anna rushed in just in time to say "SONNY"!! When they tussled and it went off. Who was shot? Carlos was shot of course!  But in the shoulder--which gave Sonny some time to taunt him and say he was going to shoot him in the head instead. Anna pleaded with Sonny and finally, because he's 'such a great guy" Sonny agrees to bring Carlos in for justice.

HOW Do they leave? Well... of course Sonny knows some DON Phillepe guy in Ecuador who is a meanie and the airport guards are so scared they let the plane take off!  "Don't hurt us"!!! Anna has a flicker of admiration for Sonny. Oh yes, yes she did. (look up there). She wasn't mad that her own cred as a police officer/WSB didn't get them clearance, nope, she had to give it up for Sonny.
Back in Port Charles, Carlos is held at the PCPD.  Seems Jules has been having his hand in the mob all along and was searching for Carlos too. Paul also gets Carlos alone and offers him a deal to roll over on Julian for a lesser jail stint. Anna of course is in the dark on all of this and thinks Carlos will get the maximum sentence.

In a side-addition to this chapter, we see Griffin telling Maxie he's Duke's son and that he can't seem to forgive Duke's killer. So, we have Paul, Anna, Sonny, Griffin and Julian all wanting Carlos to "pay".
I smell murder mystery.

FOOTNOTE TO CHAPTER ONE:  Did you know that it was Carlos that shot Sonny in the warehouse? Neither did I!!! See, I SAW Paul do it--plain as day. Seems that this wasn't going to fly so they just changed it around to have Carlos be the shooter. Hell, he killed Duke, why not have him be the Sonny shooter too? We won't remember anything!

Poor battered Nikolas. He's had more bruise make up on in the past few months than a WWE
fighter. He's having a pretty rotten time of it. He finds out Hayden is Rachel...gets blackmailed by her to give up his ELQ shares only to be told off by his moral enemy (and beat down guy) Jason that he'd better sell to HIM or ELSE. An old-school Cassadine would have poisoned everyone by now and been off on the yacht but nope...Nikolas has to find console in his mother's watery eyes and booze.

Who's having a worse week? Oh that would be Hayden.  Heh...she might have to work for a livin!!

JaSam went to GH and told Tracy Jason bought the stock back into the family. After a bit of shade, Tracy was gracious and even told Monica she was proud of Jason.  Jason  asked Michael to retake  his position at the head of the company. Everything seemed wonderful. The Qs are on the way back up....but...

DAMN IT!!  No one could leave well enough alone, could they? NOPE!!We had to have a scene where Michael tells Mom and Pop the news. That alone wouldn't have been too bad. While watching I was thinking; Huh, this might work out after all.


Oh STUPID KAREN....STUPID STUPID KAREN!!  See, Michael had to go on to tell Sonny how much he loved and admired him and how HE made him the man he was today. Aw...isn't that special? Oh, but ---wait...no, that wasn't enough to set the St. Sonny stage. Michael had to say (paraphrasing) "I might be running the Quartermaine empire, but I'll always be Michael Corinthos.".
Great. Thanks. :throwing up hands: All that great angst between the two over Sonny point-blank killing AJ is just magically gone.  It's not like Michael got mad at Sonny for womanizing or mobular stuff...no..HE KILLED HIS BIO-DAD. But...you know, GH.

CHAPTER FOUR: The Third Circle of Claudette-Hell
Starring: Naxie  and their Bed

Oh there they are... laying around again and there we are looking at Nate's armpit!! Claudette, Oh my Claudette. We know there's something else. We know Maxie Googled her-- and then after talking to his sister Nate goes all mushy and asks Maxie to marry him in the middle of the Metro.  Huh? 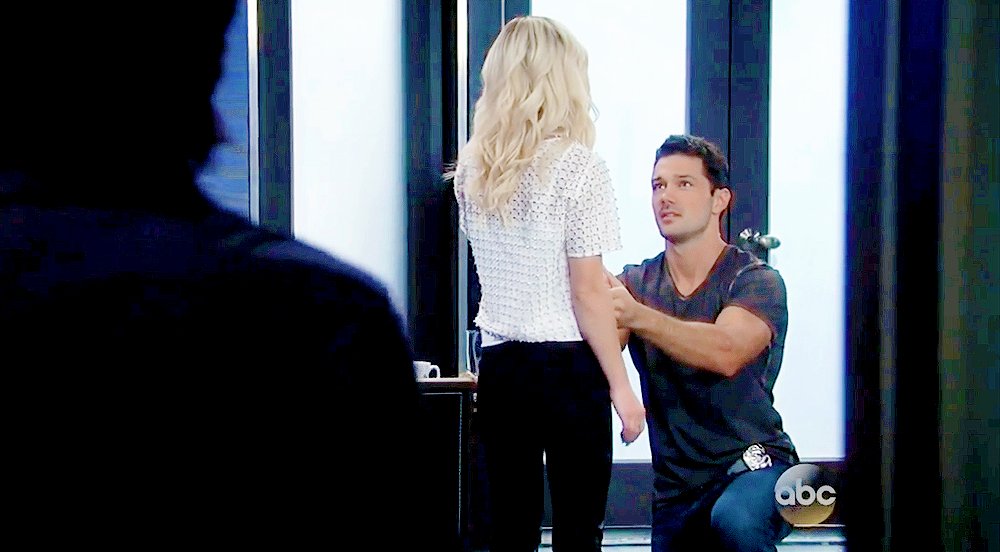 Welp.  The one interesting thing? Griffin saw the proposal and said "Oh My God, that's him"! Leaving us wondering their connection. SOME of us want Griffin to be Claudette-- other people think Nathan shot him and that's where that scar came from. Maybe Nathan killed Claudette and Griffin knows about it?  He was going on and on about Forgiveness after all.... Claudette's brother?? hmmmmmm..

WELL WELL. Take two characters I can't deal with nor do I give a rip about--put them together and voila! WHAT? What happened? Where I am I? Huh? Welp, this folks is soapy magic. It's rarely seen anymore because things are so contrived. Both actors were cute and playful. Very natural and it was a nice surprise for me.

Kiki is having bad PTSD and loses it when a balloon pops. (all the better for Dillon to comfort her!) Later, she's in a scene with Franco and something falls or a car backfires and she freaks out again. Oh, Kiki did facetime with Morgan (who's still in rehab) but I don't even want to talk about that mess. Just get her with Dillon. Now.

Hamilton Finn is visiting Tracy. Tracy asks Monica to get him on staff and Monica is happy to but they have to clear it with Dr. O.  Then,  Finn  has to leave because he's getting the shakes. Dr. O stops him in the hall and makes him PROMISE he'll be at the lecture promptly. He agrees and slinks off to the Metro where he yells at a waitress and wants distilled water in his room asap.

And...he shoots up and lays down on the couch. Meanwhile, Carly gets told by the staff that he asked for a wake up call and isn't answering. She decides to check it out with her pass key (which I'm sure is kinda shady) and opens the door....

When he comes to, Hammy tells Carly that he's a diabetic! Which we know is a song and dance, especially when she points out that's not how Lucas did it. Finn says he's type 2 or something stupid...and she buys it. Phew. Crisis averted and we still don't know what he's giving himself.

CHAPTER SEVEN:  Laura and the Doctor of Decoding.
Starring: An out of the attic-Laura and Kevin Collins, remember him? 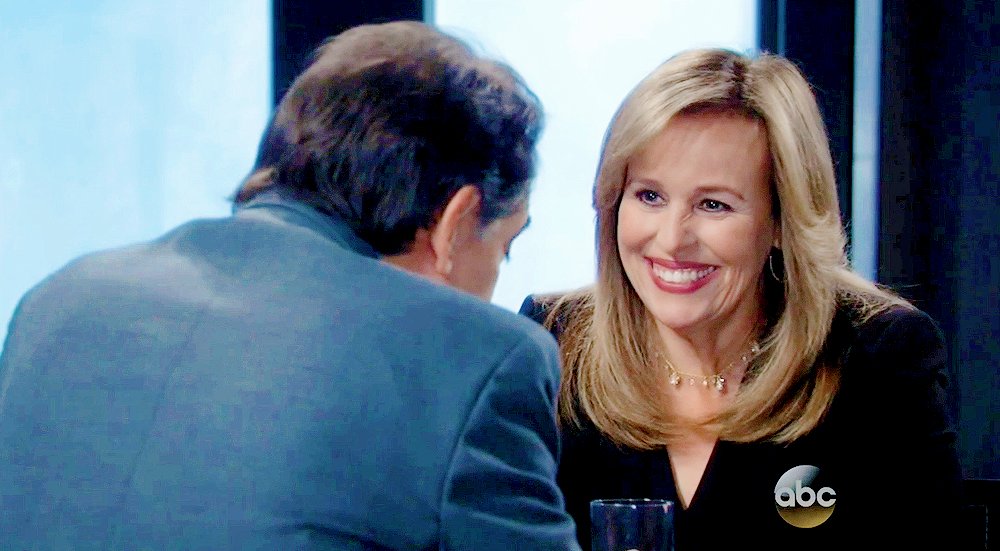 Well, who thought of this pairing? Give them a damn raise!! Not only is it a cute "Chat room" story but Genie just glowed with happiness.  Laura and Kevin..hmmm. Interesting. I didn't even know he wanted to come back to GH so yeah!  So nice to see Laura is sparkly-mode instead of "Concerned Mom Mode".

POST SCRIPTS: Jason is leaving for the Keys to transfer money to his offshore account and Sam isn't going. Valerie ran into Curtis and thought he was making a play for Hayden and got pissy. Dr. Maddox was around but didn't do very much, neither did Jordan.

MORAL OF THE STORY: The only thing Sonny isn't doing at this juncture is helping Lante fill out their workbook and giving Laura clues to the Key-Mystery. Just wait tho...May sweeps are coming!!


SCENE OF THE WEEK: Literally EVERY scene that wasn't "Sonny-centric" . Yes, EVEN the lame Valerlie has her dry-cleaned uniform and run into Lante in the park was better. The Mobby Pandering was just OVER the top for five damn days. 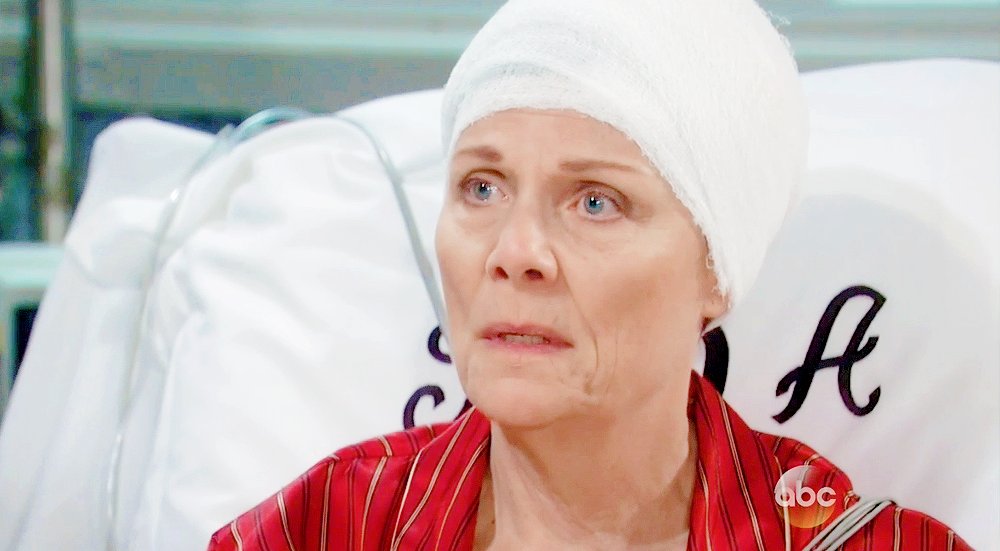 FACE OF THE WEEK:  Tracy telling Jason that she was fairly sure his grandfather was "smiling down at him at this moment" Aww. JANE Is just spectacular!!

Ok, so no prop of the week. I'm not picking the giant needle again. So, it's "write in week" . Pick away.

As you can see by the length of this GIANT blog a lot went on this week without a lot actually happening.  I guess the ELQ Stock crap is over. I GUESS the Mobular Carlos fallout is coming. I suppose we'll get the Nate-Griff connection. I can only hope the Laura story keeps moving and we find out what Hamilton is injecting. Ned's back in very limited capacity-- and Ric is showing up again. Wonder how they'll explain his absence? LOL... I'm actually dealing with Kiki away from Morgan. I didn't even include Morgan in this blog because he could just fade away and I'd be like: Oh well.

My schedule is changing this next week. I have 2 later days on Monday and Wed. So...not sure if I can blog.  I will be exhausted. Working with 3-5 year olds will do it to you and now I have a long drive on top. SO! Please bear with me!!

There are spoilers up so hit the page at the top. Have a great Sunday. It's beautiful outside--FINALLY!!
By kdmask - April 17, 2016
Email ThisBlogThis!Share to TwitterShare to FacebookShare to Pinterest

Meeting For Me! So Sorry!