Boy, it's getting harder and harder for me not to sound like a broken record..but here I go!

There are a few things about this week that cheered me. Other things? Not very interesting to be honest. I do have a giant grievance to air regarding a main character, so hang on to those hats.

It's Sunday and my parents were here to see STOMP last night. They guys all went and Mom and I watched Beyonce's Lemonade.  We loved it. Great artistry.

Too tired to make any breakfast so, I'm just having my chai.

Blog Title? Well, I couldn't think of anything and Wub Hub said "A Blog With No Name" and I thought Of Johnny Cash for some reason?? LOL..sooo there it is!!

There were THREE standout things this week that sent me over the moon...and here they are: 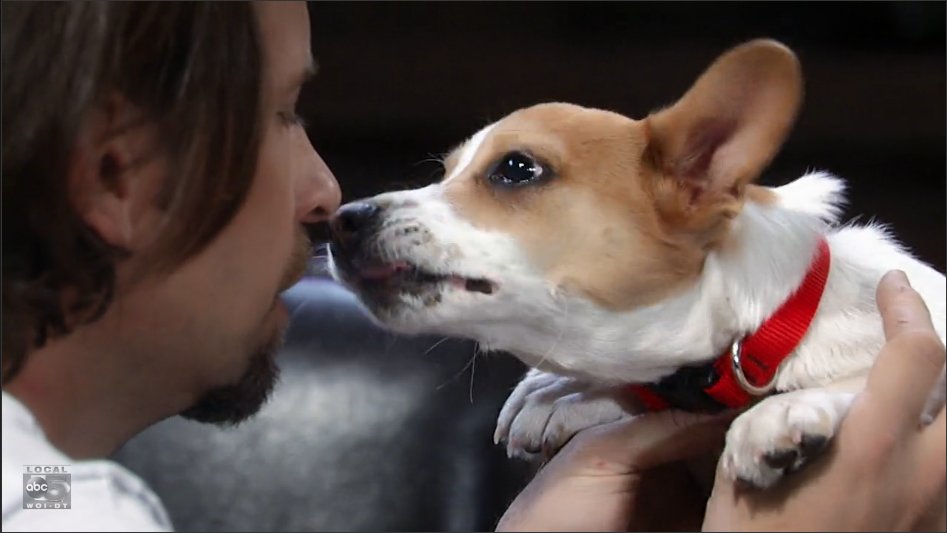 THE PUPPY: Aww, a puppy!! I love animals on soaps! Remember Daisy's cat on AMC?? Of course our own Foster and Annabell? Welp, here's a cutie for you too! Franco's dog that was supposed to be something good for Nina. She was having none of it. I got both their points. The worst thing about this whole story is the fact they are going over the top with the baby stuff to drive a wedge into Nico.
My Fave Couple!! ... of COURSE they are going to break them the hell up. Rumors say it's Friz hooking up and I tend to see that path a 'comin.  *sigh* Ruin everything for me, why don't you? Now that adorable puppy will go to Jake and let's hope Cam doesn't terrorize it.

THE BADGER! He's Back!! and in resplendent GLORY in Sonny's office! Whoot!!

THE QUEEN? You know it..Helena. Oh yes, that did make my month!! It was a total surprise because all the spoilers said "Sam has a nightmare about Jason" but nothing about Queen Hells. It was perfection!!

Ergo, the best 3 things for me this week were 2 animals (one stuffed) and a ghost with a curse.  Welp, that tells you something right there!

On to the rest of the show.  Geesh. I don't know where to start. I suppose I'll go in with the Hammy-Finn saga. It's going to be Dr. O trying to get him out of the hospital and Tracy and Monica fighting to get him to stay. Right? I mean, day after day. Finn diagnosed Josslyn with fifths disease when she comes in with a rash on her cheeks. They did send out for lab work though, and somehow I think they'll find something a bit more. Tracy and Finn have a nice rapport, playing games and poker and such.  Michael Easten is having a good time, so that's something. 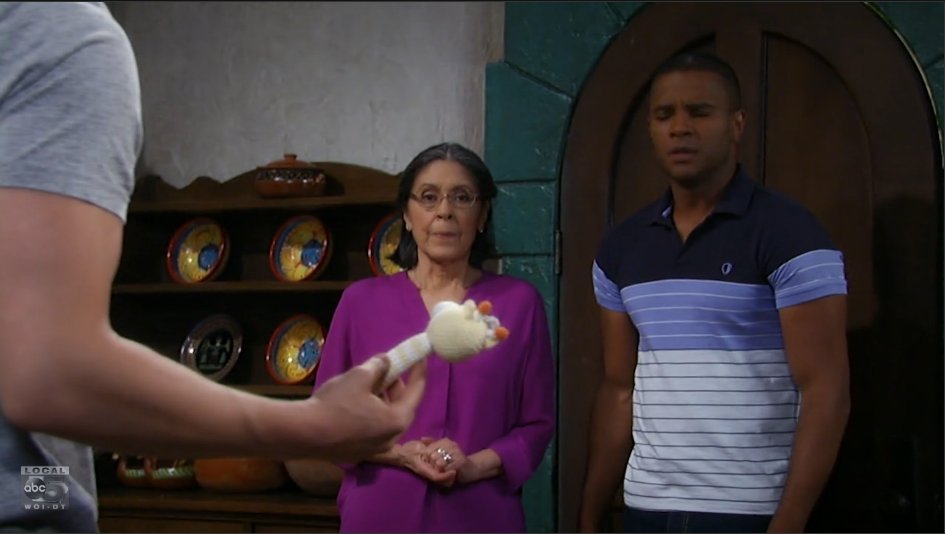 Michael and Felix are off and away to Puerto Rico, trying to find Sabrina. They see her Aunt who says she has no idea where she and the baby are. BUT! Guesss what.... we saw at the end there was a little giraffe on the floor. Ergo-- was she there the whole time? 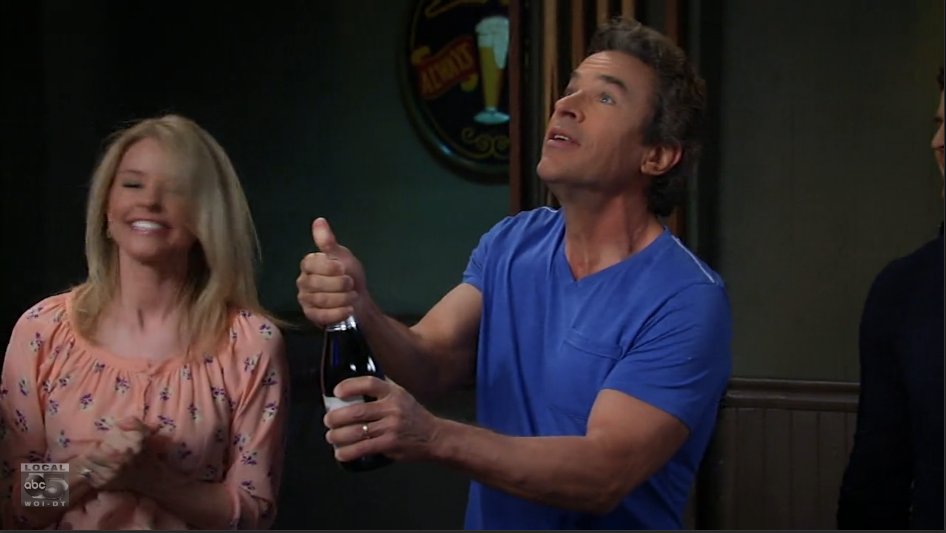 Naxie. They are engaged. And get a party in record time! At least our Felicia and Mac were there. So was..dun dun dunnnnn, Griffin!! He obviously has something with Nathan--who doesn't recognize him. Given the fact we saw a flashback to a shooting after Griff was at the Rib, I'm thinking Nathan shot him when he found him with Claudette and didn't actually see his face. Yeah, I was hoping Griff was Claudette.  But..whatever. We'll have a Maxie/Giffin/Nathan triangle before you can shake a leg.

Lante:  While I'm happy for Lante fans, I'm a bit sad for me because they've made their journey back a bit dull.  Hey! They bought a new bed-- that's progress. And..um, weren't they going to get a new place? Rocco's been totally MIA too. Probably playing with Aiden and Leo.

Here we go. The Mob. The never-ending Sonny worship. The whatever-the-hell they are doing to Anna BS.  It's seriously making me want to just FF 3/4 of the show. Why they decided to dredge up the whole Carlos shooting again is beyond me. Anna was tortured for almost 5 months with the Carlos crap (we even had a faux "ghost") and now, everything is moving backasswards with this Sloan/Carlos/Paul/Julian/Sonny saga. WHY!? WHY? I don't care about any of it.  Anna's going a bit nutty and like we saw last week, she's also kinda diggin' on Sonny's ability to get stuff done. Now she's also in jail...and *sigh*.  I just can't believe how much I don't care about any of it. Julian's gonna be sucked back in..yada yada. Ava's dragged into it because Sonny is torturing her. ugh enough.
Yes, I do have better ideas but I'm not even going to bother because you've heard them all before.
The instant Paul Loves Anna is a bit strange as well. I mean we've seen him flirt...but? Deeply in wub? umm...

OH, YEAH...Alexis is now representing CARLOS! Bahahaha. Look at her face!! It's ALL of our faces!!! Our collective WTF MOB face!!

Long Hair, cute talks with Pseudo-Starr, Puppies. Todd is in Full-Force now. No denying it.

Nina got really drunk, Dilly put her 'to bed' and Kiki got an eyefull of his chestial-glory.

Laura and Kevin have promise-- the "Heartbreak Hotel" clue probably does not.

SCENE OF THE WEEK: Thank you to my magnificent Connie Towers. LOVED this!

PROP OF THE WEEK:  Backgammon game. Throwback to the 80's

FACE OF THE WEEK: Anna weeping in Jail. That's me. Weeping. Just weeping. 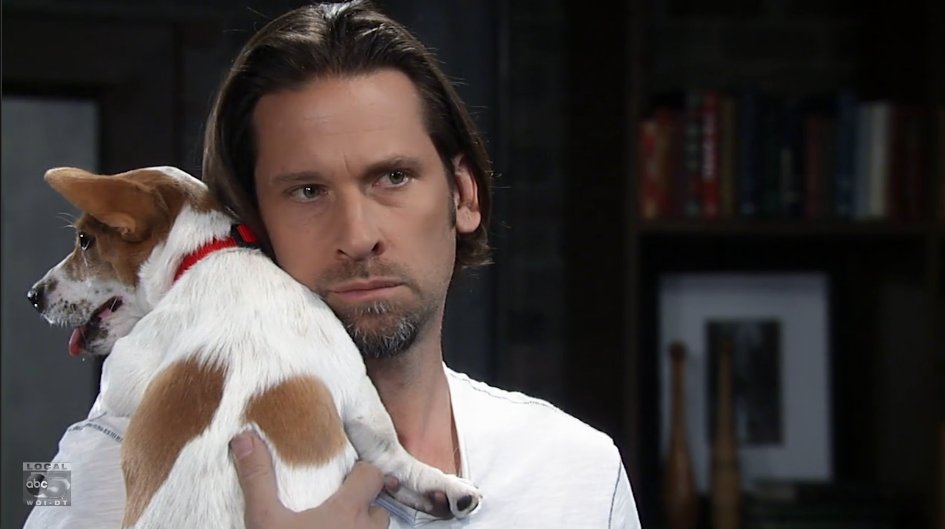 RUNNER UP: Don't take my DAISY!

I still feel like so many stories are expanding at a strange rate and others are just lost. I'm obviously very unhappy with the whole mobular stuff. And to have Anna keep sobbing over what she did to Carlos is pissing me off. She was WSB damn it. She put Faison in a damn hole in the ground. She knows it was a fake out and she didn't really even shoot the guy so--get over it. She haunted herself after the shooting and quit her job. Ergo, enough.  Yes, Finola can act the hell out of it but I'd rather see her doing something --anything else at this juncture.

One more note: While I love Jordan and find it interesting she's police chief, isn't it she a bit young for all of this? What if Dante was in that position? She could be a detective with Nathan and it would put Dante in a unique place; between the mob and justice. No looking the other way when you are the head of everything. Just a thought.

Ok then! That's it! My new schedule didn't really interfere with my watching that much. Mondays are the worst. Which sucks because I think the show still has it's Friday cliffhangers on Monday because of the Nancy funeral. Just my luck.

Have a good week!! Try to keep all the characters straight on this show. By the sound of things, more are a comin' down the pike too.  I WILL Be going to GHFCW btw, not sure which event yet tho.

THX to @SourceJenn and Lisa W for screen cappies. I couldn't do it without ya.
By kdmask - April 24, 2016
Email ThisBlogThis!Share to TwitterShare to FacebookShare to Pinterest