Usually I go with a nice "Medical" title but Tracy/Luke said this so much, I had to use it. So.... 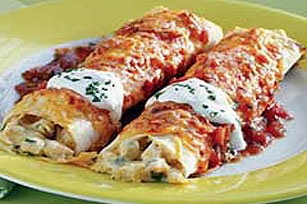 My Scrubs are Mexican themed-- and I think I'll have a nice Cerveza to go with!! This week was extreme (on both ends of the spectrum)--I loved it, I fell asleep during it..I screamed, you name it!!
Buckle up! 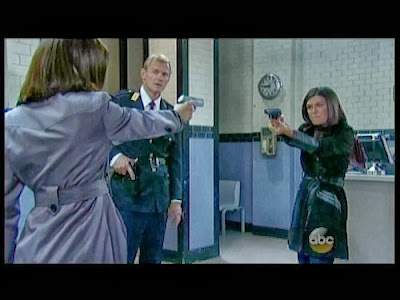 Monday and Tuesday were AWESOME... These two fought it out-- (with uber stoopid guard in the back) and the FAISON came out as well!!  WOOT! Anna's  "Justice Bitch" was such a great line. Finola sells whatever she's doing. She's never EVER phoning it in. 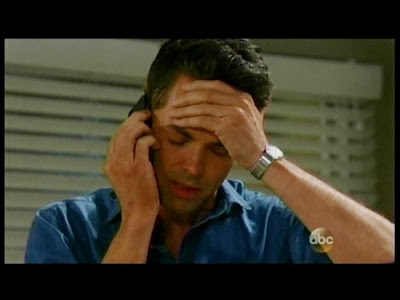 Speaking of Phones-- Patrick tried in vain to re-trace Robin's call. He sweated, pouted, sighed but to no avail. Then BETTY had to come in and be all "Nope...you're crazy.... it isn't her-- nope..stop it'. Now, we KNOW she "Loves" him and is making sense but that doesn't mean we don't hate her guts any LESS! Especially when she goes ON to tell him NOT to call Anna about it!  Blood, Boil.  Yes, Liz said much the same thing but surprisingly, I didn't feel the same wrath towards her. Hey, Liz said Cam and Aiden were visiting Sarah--which, I guess means Cam is home schooled? 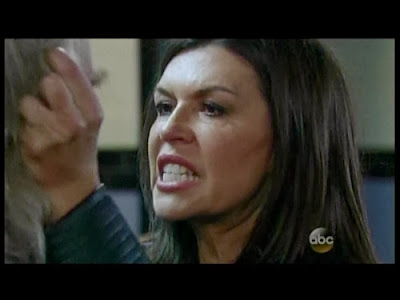 Anna Grabs Faison by the hair and is saying "TELL ME"...TELL ME!!! Such a great scene. Not quite scene of the week (see below) but superb none the less... Fin was fierce !!
Also on Monday: Luke gets his cure and Jerry gets shot.
THEN THERE's
TUESDAY...and WEDNESDAY... slowest days EVER. Geesh,, it was like a switch got flipped! Such excitement to pure-- snooze fest. Painful 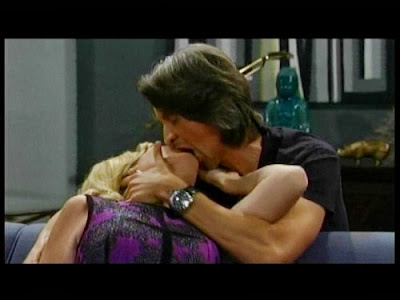 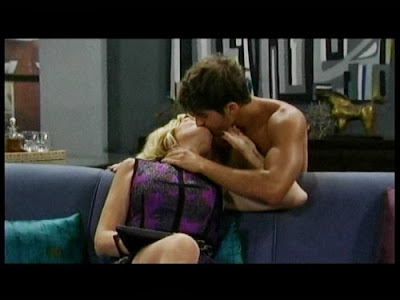 Which was really this..
BY the WAY..poor Morgan gets replaced in all the sex fantasy dreams
by SOMEONE ELSE!!
First his own Brother..now Silas!! ahhahaa 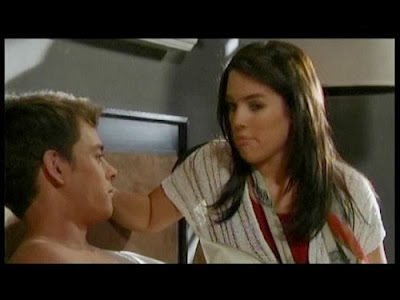 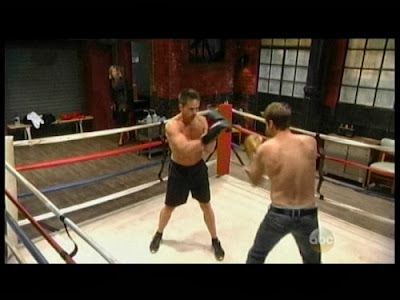 Alexis got the DNA results, Diane found out about Morgan and Kiki ... Sonny's lightbulb goes off about Julian. And, oh..Shaun totally oogles The Above Boxers. A LOT! 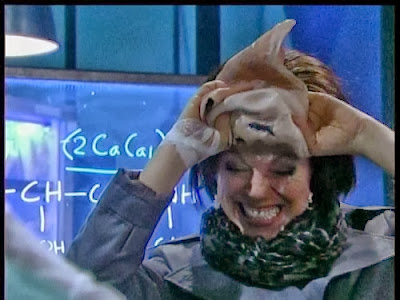 FINALLY Thursday came and our own Dr. played around with Anna's rubber face again-- and scared Robin half to death. GG is so fun in these scenes. She (and Anders) just stole my heart this week!! 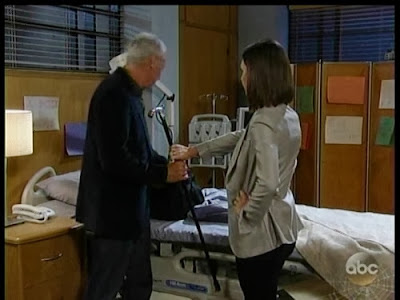 Robert...making Anna take he and his DAPER CANE to Wyndemere!! eee!! Mac had to go back to Help Maxie so we can get these two off on a caper! 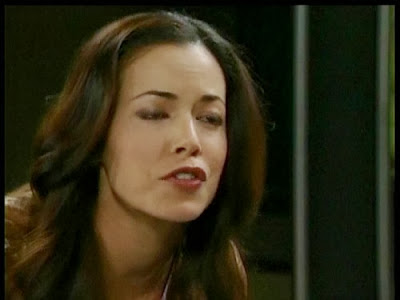 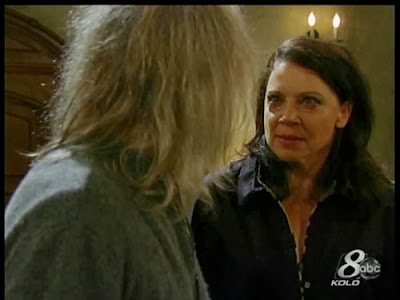 Oh my gosh... Lesil was just so awesome in EVERYTHING. Damn. Her bra--her pain. Her longing for Faison. Dang. Then when she found Brit, all she wanted to do was tell her about it and Brit shut her down. Rightly so-but still,  her face. Ah. Yes, I felt for her. 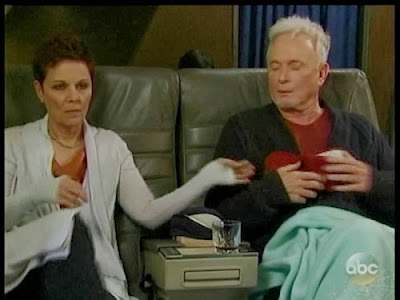 Luke wanted warm nuts...and Tracy's slippers.  He was all cheery and back to his snarky self! 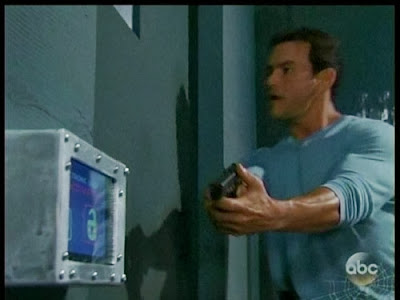 Robin and Nik saw each other-- and I WILL NOT TALK ABOUT WHAT PATRICK ASKED SABRINA. No.  NONONONOoooo. I will NOT. 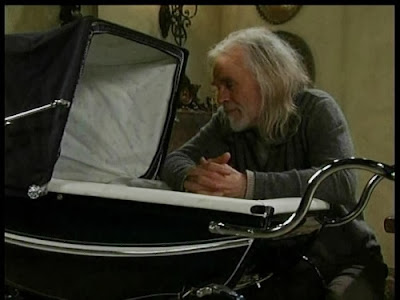 SCENE OF THE WEEK: Yes,  Wubbers, you are sadly at my mercy-- and this was MY FAVE scene of this week. Papa Faison talking his Danish-Greenlandish hybrid language to Big Ben!! Eeeeeeeeeeee .  Made. My. Month. 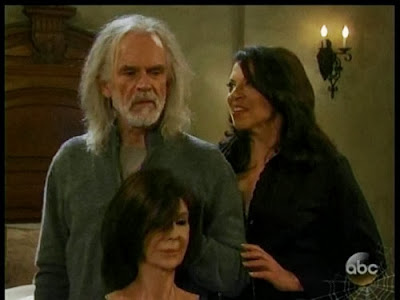 MOST CREEPY-EROTIC SCENE EVER:  Yes, EVER... Faison asks Dr. O to PUT ON THE ANNA MASK!!!  Oh. Myyyyyyyyyyyyyyyyy. I should have written that. heh. (You know it's something I would do!) 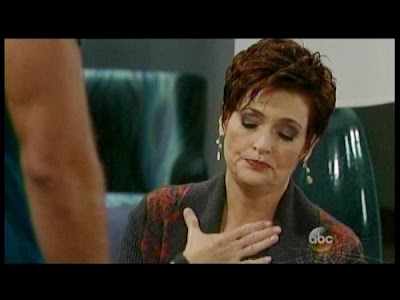 FACE OF THE WEEK: Diane trying to choke out the words "Pro-Bono" (and not look at Morgan's chest) 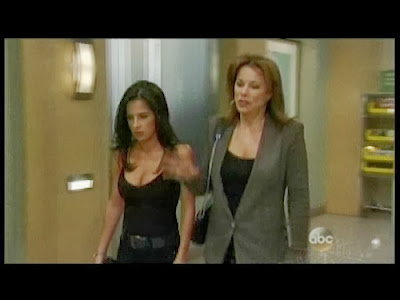 Speaking of Chests....PROPS OF THE WEEK: Belong to the Davis' Girl's racks...they were hobbin' and  bobbin all over the hospital.

So great about the ratings rise, especially in the key demos.  This show can be maddening. On fire and then ice cold. BUT-- it's been a great ride.  This next week should be good too.
By the way, who are you rooting for with the baby Connie/Georgie situation? Lante or Spixie?

By kdmask - October 19, 2013
Email ThisBlogThis!Share to TwitterShare to FacebookShare to Pinterest