This week was a GLORIOUS romp into the past, present and future!! WOOT! So good!! SO SO GOOD!
Grab your coffee and some danish because it's time to dish. I don't know if I'll have enough ROOM to write it all down but I'll try...


OMG what a week. I don't know where to start.  Seriously. Where DOES one start!!?
I tell you, it payed to be OLDER this week while watching GH!! Hell, ancient-Faison mentions of him owning Wyndemere, and his "book author" moniker "PK Sinclair" ;  the entire "Ryan's Bar' thing-- the back story of Joe/Rose and Paddy Kelly.
LOVED it.
Sorry for those of you that don't have a ton of GH viewing history such as myself.  :giggle:  So sad, too bad!

Let's dish about the Scorpio-Files first. 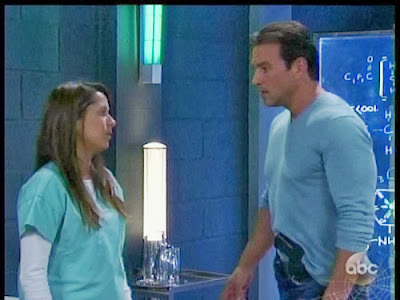 Nikolas and Robin..two old friends find each other in the depths of the Cassadine lair!!  Even though it was a bit uneven in the whole "let's get out of here" aspect, it was fun to watch. Nikolas tells Robin about Patrick's "non-baby" and other Port Charles info. In the meantime, Anna's yelling at Obrect to tell her the truth about Robin.  Obrect was pitiful, knowing that Anna has Fiason's heart. Awww.. 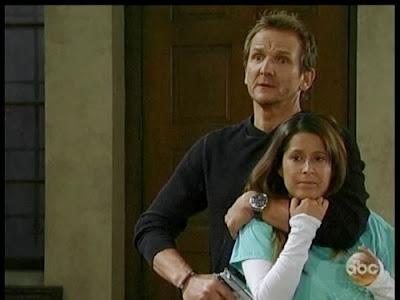 SOMEONE just shoot!!  Geesh.. LOL. Although way to keep a story going--put Anna and Robert in the lab, lock it down and use it to blackmail Robin. Great banter in these gunpointing scenes. Fiason and Obrect sniping at each other was priceless. heh. 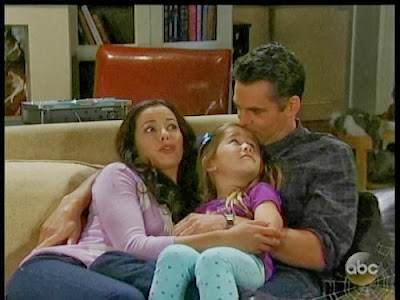 Then THIS WAS going on. ugh..  Sabby says YES!!... whatever. I am enjoying hating her though. LOL.  Not her fault one bit...but she's so NICE and so... sweet and BLECK. (We hear that's going to change, and I guess we'll find out once Robin's face is out).  I love to hate goody-goody characters on soaps so I'm  happy. 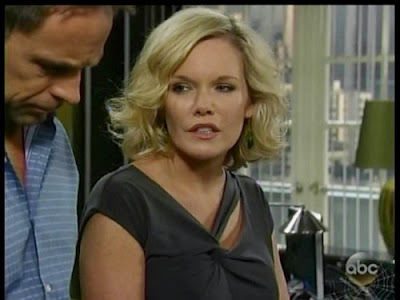 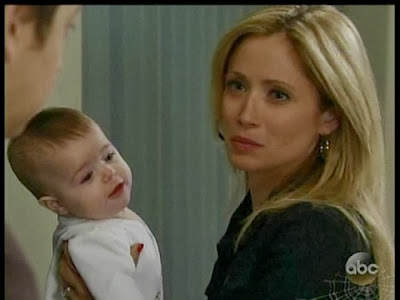 I guess Dom Z had the week off because Lulu was the one doing all the bitching about the Bay-Bay.  She was so mean to Spinelli who, let's face it, had little to do with Maxie's secret. Let him at least HOLD her. I know Lulu loves the kid and yada yada-- but Maxie did carry her for 9months and is attached too. Maxie's talk with Mac was good. Boy, KS looks REALLY PG, doesn't she? LOL. She's so tiny that it will look like she's ready to pop for while!

Lucy was fun this week too. Stupid KIKI gave her the side-eye in Kelly's and I could have smacked her! You don't mess with LUCY! Lucy had all the history to get out to Alexis and Sam about the Jeromes AND was our narrator for more with Heather! 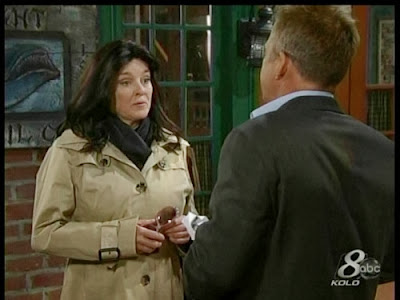 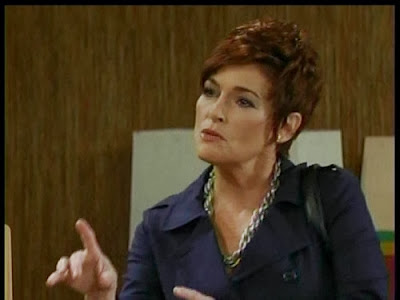 Diane had the best lines of the week.  Between advising on the custody battle, looking at Morgan's chest and advising Franco on his "art", she was in fine form! I loved how she tried to hide Derek's signature on the form when Tranco was signing it. 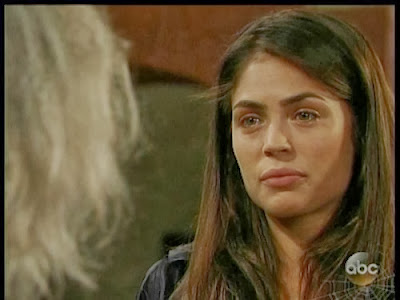 SCENE OF THE WEEK: It was hard to choose but the one that stuck in my head the most was Britta confronting Faison over her baby.  Kelly did a FANTASTIC job with Anders.  For a relatively new-ish actress on the show, she was brilliant to watch. Bravo! 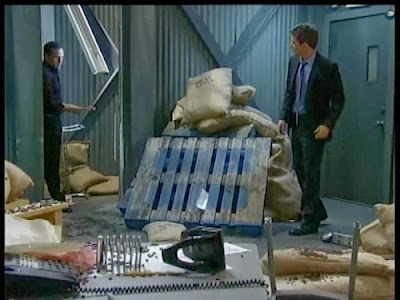 PROPS of the WEEK: First of all, the poor pitiful florscent light hanging down that flashed on and off for two days. No one thought it was of any danger-- LOL I also nominate the poor, torn up coffee bags. 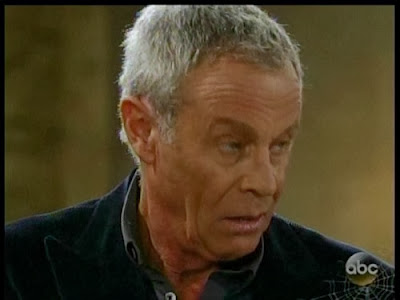 FACE OF THE WEEK:  This is the face when Robert heard Obrect talk about Faison wanting  her to put on Anna's face to have sex with him.  "huh..WHA"?


Next week we go to Ryan's Bar in "NYC" and see DELIA! WOOT!! Silas and Sam-- out finding her past from Delia! ahahaaaa... Did you know that Mike Corbin  (Ron Hale)  played Roger on that show and was married to Delia?  Delia was such a character- very "Roxy" like but not as goofy.  Should be a good walk down memory lane.  Robin will be hiding around town and Halloween is coming!!
My doggie Gus is having Surgery on Wed and will be home Thursday evening.  So, if the blogs are interrupted that's why.
By kdmask - October 27, 2013
Email ThisBlogThis!Share to TwitterShare to FacebookShare to Pinterest