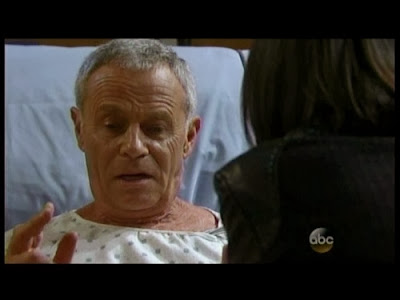 Mac literally got the biggest "wake up call' of the week, finding out that Robert was out of his coma (and looking like he spent a year at a great spa). Lante got a wake up call about Baby Connie from Brad, Robin got one about Patrick via the DVD--and Luke found out Jerry was using him as a human lab-rat.

So much happened in five days  it's going to take some time to dissect it all.  Put your feet up and turn off your beepers--let's go-go!


Where to start...Ok, I'll go with the things I'm NOT talking about;  Carrrrlooos and Sabrina.  DON'T. CARE. I don't even care about her and Paddy because like I've said, she's a gonner once Robin walks back into  PC.  Yeah, he took his ring off but HAHAHAA. Brush back up on your spanish, Betty.  Alexis and Derek. Whatever--I'm only mentioning them at all because Duke mentions using Lucas' DNA to find out if Sam's a Jerome. Yeah for Lucas!  Kiki and Michael and their pizza? Whatever. I'll mention MOVA because of the sizzle sex scene. Morgan's going to get a bit needy, I fear! 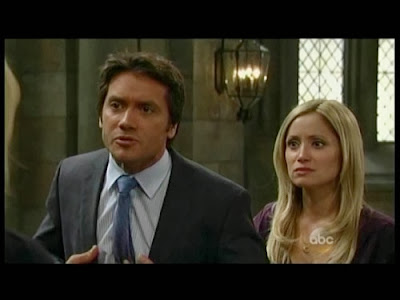 Alrighty then, On to the big stuff!

Baby Reveal:  Sort of a weird let down..having Brad come in and drop the news.  It did give me some of my fave lines of the week, though. I loved Maxie being pissed that "some nobody" ruined her lie. Loved that she was all "The first rule of lying is Deny Deny Deny"! She is a great liar..and she knows it. OTHER people screwed this up for her!! (that's Maxie's rationale anyway).  Spixie were both terrified and gulit-ridden when the truth came out and Lante were positively-- shocked and heartbroken. Dante, who never really wanted Maxie as the surrorgate in the first place was actually the more rational of the two in the end. I personally don't care for Lulu's facial histronics so for me, watching her find out was more of a curiosity than a real tug of emotion. When Emme plays it more subtle (like back in the loft the next morning) I can deal with it all much better. Dom was on point throughout, and Lisa LoCicero was also wonderful; playing Olivia more rational than the screaming banshee I thought she'd end up being.
Spixie themselves went through a range of emotions from trying to hide it all to guilt to finally wanting to claim their daughter. Nice progression and dialog through that I thought. It's going to be an ugly fight for the baby and because I don't think Lante has a THING to stand on, I'm interested to see how this is done.
BTW, I don't see Maxie's ruse as a deception. It was a progression of wanting to do the right thing.  Ergo, I don't see it as the huge 'sin' as a lot of people do. Plus, it's a soap so I can want whatever I want.

Robin's Alive: Of course, we knew she was-- but seeing her again was so wonderful! And she's in a funky "Walter-White" type lab room with her SCRUBS on!! Jerry taunts her with the DVD and then Dr. O taunts her with a real, live baby! "Here, watch this for me"...ahahhaa. Poor Dr. O, in love with Faison so much that she just keeps trying to win him over by her evilness.
Kim McCollough was perfect and  spot on with the DVD watching and her expressions. She actually looked a little thankful toward Jerry when he first brought it in. Of course, she should have knows he was using it to be a prick and mess with her psyche. When she knocked out Dr. O I was cheering. You go, girlie!!

Robert's  Awake:  Goodness, give me some of that "coma'!! He looks fantabulous! I'm SO HAPPY Mac went to see him with Anna. A bit curious that Holly was absent, but I'm not complaining.
It also didn't take days to have him remember Robin's being alive, small miracle in that.  I hate waiting for reveals.  Now we can just get down to finding her. 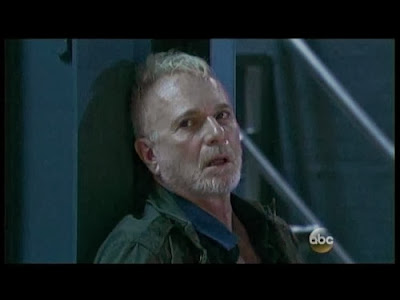 Sweaty, sweaty mess.... BUT he's  Hold up in the LUXURY suite in the Cassacreep mansion! Getting fresh salad from Jerry! Of course, he finds out he's going to be the first one to see if the cure works so, that may be a bummer but in the meantime, his last days look pretty cushy. We see Tracy comes in Monday--he'll have her too.

TANDEM SCENES OF THE WEEK: 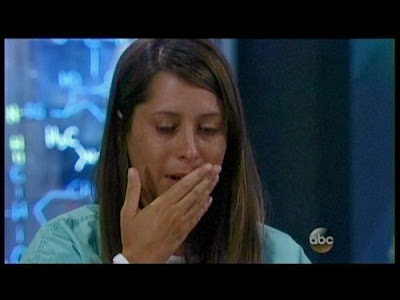 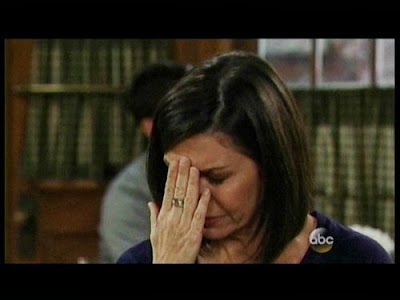 Two Mothers...same grief ... look at this!! Kim and Fin hit it OUT  of the park AND manage to just walk away with the show.  Robin's tortured gasping at seeing her Emma and Anna missing Robin so much. Wahhhh. Killed me. 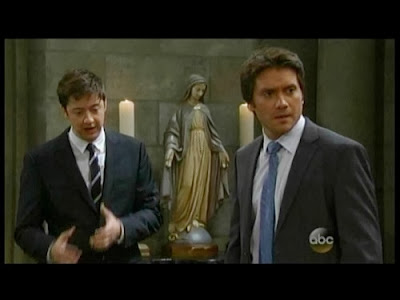 PROP OF THE WEEK:  I'm giving it up for Giant Mary..which seems to have taken Giant Jesus' place. They must have raided the Immaculate Conception Church in Wellsville, NY for them. 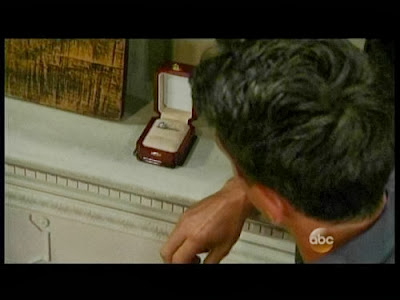 RUNNER UP: Paddy/Robin's ring box.  Damn it Patrick!! TOO SOON! TOO SOON!! 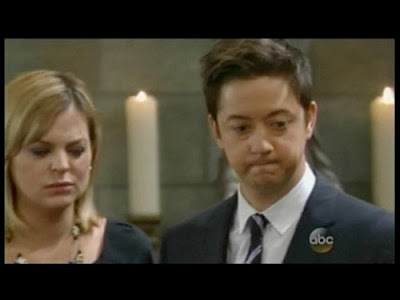 FACES OF THE WEEK: Er...um..yeahpper. That's our baby ya got there! Sorry, not sorry! 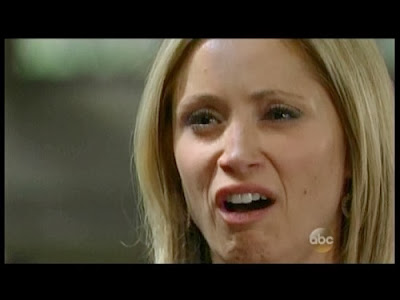 Anna's face when she found out about Robin was also pretty epic but I had to give it up for the Spixie guilt/shame. It's not everyday you lie about  a miscarriage and same-sex day shenanigans that made a baby that you then gave to your BFF.

Next week looks wild as well...it should be a fun month. I do think AJ will be back...and Liz.   The whole Robin thing with be exposed and Luke will either get saved--or not. (Can you guess which?). Here's hoping Genie decides it's time to come on back. We know Lynn Herring is taping with Kin and Scotty's running for DA. I'm still hoping no Jr. Mints in sight! I was thinking about the "kids" on this show compared to OLTL. I like them on OLTL because they were all linked together. The younger kids knew the 20-somethings or were sibs and things flowed together. Right now, Kiki and Michael have no friends but each other which makes them as boring as paint drying, imo.  We know why poor  Morgan doesn't have any!! They should have somehow made Molly closer to Morgan and then, have her meet Kiki. Kiki needs a friend to gab with-- and take her goo-goo eyeballs over Michael.
OK! Well, have a good one. Gus sees his specialist next week. Poor doggie. Poor us $$$.

By kdmask - October 06, 2013
Email ThisBlogThis!Share to TwitterShare to FacebookShare to Pinterest