METRO: Dante/Sam... Carly and Sonny. They are happy Dante and Sam are 'together'. They all go over the Greece trip, Drew..yada yada. Sonny and Dante talk about the families. Carly and Sam talk about Drew. 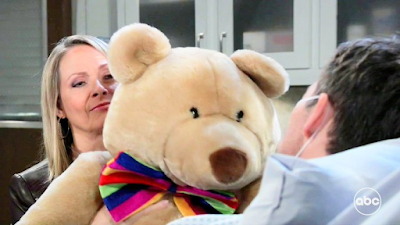 Gladys is visiting Valentin!! To tell him about the baby??~~ Maxie and Britt rush to get there first. Gladys is ready to spill and Brook runs in and stops her. Brook says in the hall that Gladys will lose her blackmail leverage if she tells. Gladys says to get Sasha and Maxie on board then. Brook finally gives her her private credit card and tells her to keep her mouth shut.

Spencer is talking to Nikolas about Hayden. Spinelli and Shawn are listening in the van. Nikolas says he didn't have Hayden shot. Spencer doesn't believe him. Nikolas lunges at Spencer and throws his phone in the river. Says he's trying to record him saying that he had Hayden shot. Spencer yells back: NO! I'm trying to get you to say you didn't have her shot at!! So, they go on and on and basically when Spencer out and out asks Nikolas about the shooting he says: LET. It. GO. Spencer says he knows he did it but..WHY?

Spin and Shawn say they don't have enough evidence against Nikolas because he didn't confess.

Cassadine Island: Britt and Jason snorkel up!! ahahahaa. OMG. Peter wakes up Liesl but kicking her. Grrrrrrrrr. She says he's taking advantage of his fathers' genius. They are in Cassadine lab. HE wants Dr O to "condition" Maxie to forgive him. WHAT? So weird. Anyway, Liesl spots poison. oh IT'S ACID! She throws it at him and it gets his arm and hand. He radios guards.

Britt is alone in the boathouse-- she drops the radio and makes noise. The door opens and she shoots...a harpoon? Not sure what that is lol

Jason has a gun on Peter!

Maxie and Brook plan to make Gladys shut up

Sonny will visit Cyrus in jail

By kdmask - November 01, 2021
Email ThisBlogThis!Share to TwitterShare to FacebookShare to Pinterest

Well, this week was a week that proved just how bloated GH is with cast, stories and also-rans. I could sit and complain for an hour but I... 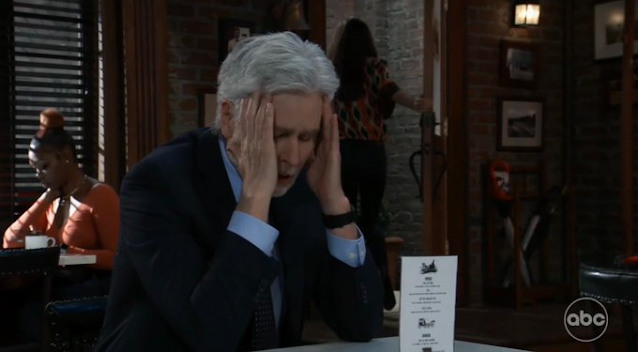