" I Smell a Mini-Series"

I thought it was Wednesday for most of the day so... I'm already behind!! LOL

Obrect is down, harpoon sticking out of her "You came for me, Britta"!! Britt tries to pull the arrow out. Dr. O passes out. She wakes up and Britt dresses her wound. Dr. O finds out Sonny is alive.

Jason conks Peter with the gun when Peter tries to run. Peter is like "I must have something you want if you haven't killed me yet'. Jason goes to the boathouse with Peter but by that time Drew is in there holding Britt hostage.  Drew and Jason have a stare-off. Peter says this could be a great mini-series.

Trina is vibing out to music at the Gallery and someone come up behind her. She grabs her mace but it's only Spencer. He needs a friend to talk to. They talk about Ava...Trina likes her and Spence doesn't. She doesn't trust Spencer.

Spencer left his FIRST shift at Kelly's and Cam is pissed. Esme bops in and Joss is like what do you want? She can't believe Spence left after his first day. She says it's Ava and Nik's fault for making him wait on them. Oh, Esme wants to go glamping with Cam and Joss. Then she figures out that Joss and Cam are virgins LOL 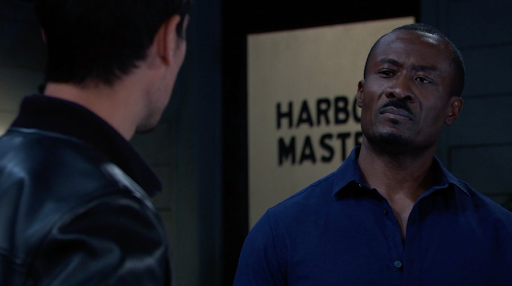 Shawn calls out Nikolas about not telling the truth about the Hayden shooting and letting him sit in jail. Yada yada... blah blah..fake.. fake fake.  Nikolas does say that Hayden has known who shot at her.."she's always known" he tells Shawn. He offers Shawn money to forget about it. Shawn's like: nice try but no.

Alexis and Harmony talk in spa-jail about the Cassadines. Alexis is actually scared of leaving jail because booze is everywhere out there. Harmony tells her there are prisons everywhere. Even in your own mind.

Cam fires Spencer ...and hires him back after Spence gives him a sob story about his Dad

Stupid Jason gives up his gun rather than shoot Drew..ugh, now Peter and Drew have them all at gunpoint.

By kdmask - November 02, 2021
Email ThisBlogThis!Share to TwitterShare to FacebookShare to Pinterest