Drew and Sam hug. Drew says he's in once piece and thanks her for going to look for him. She says Monica is going to be so happy (has no idea Jason is gone). Then Dante brings down Scout and Drew is so happy. Scout doesn't know who he is and turns away. He brought her a unicorn. She loves it. She goes to show the boys. Drew says he has to tell Sam and Dante about Jason. Sam is like: OMG Scout gets her father back and Danny loses his!

Marshall talks to TJ in the GH chapel ...saying the same thin g over and over and then OOP! He says Curtis is his son! TJ can't believe it but he shakes his hand. Curtis walks in and isn't happy. tells TJ to leave. He and his dad banter and Curtis keeps saying he doesn't want anything to do with him. Marshall leaves and says he hopes they can be family one day.

Nina and Phyllis see each other at GH. Phyllis is going to volunteer today because it's so hard for her without Lenny. They both end up going to Porita's. Portia tells Finn, Violet, Nina and Phyllis there's a change of venue. TJ and Curtis are also going to Poria's who's having it catered.

Carly sees Britt and wants to know if she found her mother and she can't wait to hear about their adventure from Jason. Asks about Peter, yada yada. Then says: Everyone is safe, right? RIGHT??  Britt says she's sorry but Jason saved she and her mother. Carly's like I Don't CARE! WHERE IS JASON?!! Britt tells her he's gone. OMG... such a good scene. Carly says no body means he's still alive. She's going to Greece to dig him out LOL.. Britt says no, he's gone. Carly yells; BECAUSE OF YOU!!!! She yells that she wishes Britt never met Jason. Storms out of GH

Anna goes to see Sonny..she tells him about Jason. She wants to sit down. She tells him the entire story. He's reeling that Jason is dead. Anna and he hug. She leaves...he throws stuff.

Ned, Brook and Chase. Monica comes into the foyer and is all HI CHASE!! Brook Lynn says 'Um, he's family now". Monica looks fantastic. Then Olivia is there, can't believe what's happening and Chase is Bailey's daddy. THEN VALENTIN walks out!! ahahhaaha!! He's there too! :Clapping: OMG He had the contract Nullified about the ELQ shares since Brook Lie and he's still Prez of ELQ!! Then he tells everyone he ate the turkey and gave the rest to the dog (which Franco gave Jake but it stays at the Qs) !! Olivia screams. Then Val tells Brook she's the runt of the family and can't even sing. Chase punches him!!  Val gets up and leaves ...says Have a Nice dinner! Monica says we are calling Luigis for pizza!

Carly sobs at the house; sits on the patio and Sonny watches her through the window

Pizza shows up at the Qs...Monica wonders how it got there so fast. DREW brought it!!

By kdmask - November 29, 2021
Email ThisBlogThis!Share to TwitterShare to FacebookShare to Pinterest 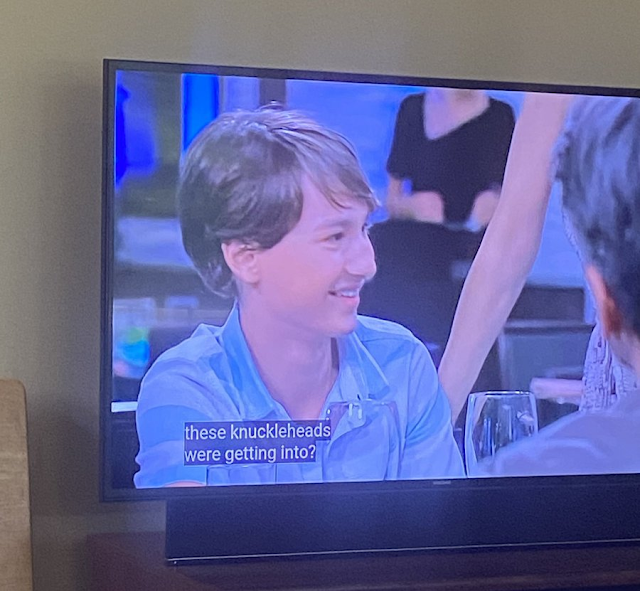