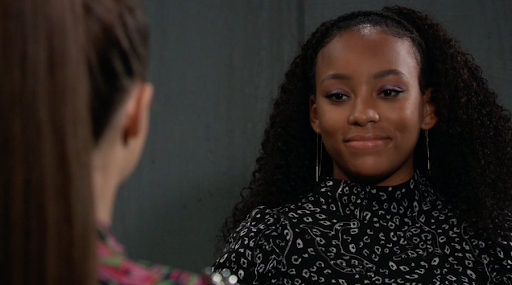 Art Show:
Sasha says she knows the sex of the baby. The email told her by mistake. She asks Brando if he wants to know. Of course he's not sure. :EYEROLL:

Gladys figures out Kip isn't "Paulie" and Brook Lynn is upset. Gladys demands controlling shares of Deception not to tell.  Brook is like I can't do that!

Cam and Trina innocently hug, Esme is all smirking. Then she says that she had no friends at boarding school because they were "jealous" ... when Esme tells Spencer about it he's like SO WHAT. Trina would never hurt Joss.

Esme says Trina will have a night she 'never forgets"

Olivia brings Leo to the Photo show. Ned is there too. Olivia is going to meet the photographer. All Leo wants to do is stare at the photos. Olivia thinks Ned is wonderful for doing this for her.

Brook Lynn is supposed to watch Leo but she talks to Kip and Leo goes missing.

Nik finds out that Victor is free and roaming around PC. Ava's not happy. Nik leaves to run interference with Victor.

Then, Gladys goes into the backroom to make a phone call just as Trina walks out. Oh then Sasha goes in!! Brook Lynn peeks in to find Leo..leaves. THEN Esme wedges the door shut thinking she's trapping Trina ! OMG Sasha is going to totally go into labor LOL

Dr. O and Britt hug...they are in a room with Peter and a guard. Another goon goes and gets Drew. Drew makes Jason promise he will kill him if Peter makes him do something bad. Jason agrees.

Peter gives Britt a piece of paper for Jason to read "verbatim" .. goon takes her out of the room. She and Jason read a paper while a goon tapes them. They say they are being held hostage and don't look for them because Peter will kill them all if they even try to find them. The video is sent to Anna. Anna shows it to Robert and Valentin. Valentin finally says to take Robert with her to the island if he can't go. He knows how to get on undetected.

Upshot is: Drew is being sent back to PC to bring Maxie to the island and Peter wants Dr. O to "Program her" to love him. CRIPES.

Gladys and Sasha are trapped in the storage room

Brook tells Ned and Olivia that she lost Leo

Jason somehow has a tarot card

By kdmask - November 16, 2021
Email ThisBlogThis!Share to TwitterShare to FacebookShare to Pinterest