Sasha's screaming, Liz seems to think something is wrong. They get the doctor and do an ultrasound. Emergency C-section. She's got a placenta abruption. It happened probably when her water broke.

OMG BROOK TELLS Valentin the baby isn't his!! They are sobbing!! OMG!! He's so upset that she would do this to him over stock. She says it wasn't she has to explain it all to him.

Nina is at GH for Sasha..runs into Maxie. Maxie is frantic. Maxie says if Valentin finds out maybe he'll help them! Nina says: unlikely LOL Nina realizes that her making Sonny love her is like Brook making Val love the baby.

Chase is starting to piece things together while drinking at the bar. Has flashbacks to talks with Brook. He calls the PCPD to get the EZ Pass records from Brook Lyn's car. He finds out it was Beecher's Corners. Bobbie is in Charlie's too and says how nice Beecher's Corners is..she was there Memorial Day. He asks why. She says she sees no reason not to say anything now. But she was going to deliver Maxie's baby so Peter couldn't find her. OH MAN....Chase is going to figure this out!! Bobbie says Maxie wanted to protect her baby from Peter.

Sonny and Carly. Carly pushes him and pushes him about making Nina pay. He says if the do that it will be "denying who I've become"!!! Carly almost faints!! Sonny does a lovely speech about being Mike and being scared not knowing who he was and the only friends he had were Nina, Lenny and Phyllis. OMG This is so good. He's quiet and just being sincere. Carly's not even ready.  Sonny starts to tell her about Nina and then BOBBIE WALKS IN. He's like OMG! HI! I gotta leave..see ya. LOL . Later she wonders if Jason is the reason Sonny is upset. Carly says no. Bobbie says "oh that's good because 3 in a marriage is not a good thing" Pffffffft. 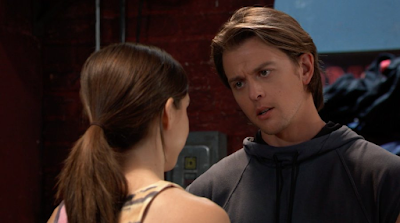 Willow and Michael. Willow is BOXING AHHAHSHSA. She tells him about the park and Nina and of course, his rabid mother.  They decide to go to NYC for the Thanksgiving Day parade.

Cassadine Island: Everyone is in the tunnel. Drew and Jason follow. Dr O Says they are going to collapse at any minute. All of a sudden they are lost and Drew comes out with a gun and holds it at Peter. Jason shoots Peter in the arm when he goes to pull the card out. There's a shoot out. Then the guard gives up. Then PETER IS GONE. of course. Then he's back shooting! The entire tunnel collapses.

Nina ends up in Charlie's looking for Phyllis...Sonny walks in

By kdmask - November 19, 2021
Email ThisBlogThis!Share to TwitterShare to FacebookShare to Pinterest