MONDAY! And it's cold here--snow in the air! I think we are due for some inches tonight? Not sure. We know it's coming soon!

Sasha's baby is taken to the NICU. She's still being operated on. She passes out. Brando has to leave the room.

Brando sees Maxie and sobs. She hugs him, tells him to hold on to the first time he saw the baby. He says it was wonderful. But he's scared because the baby isn't breathing. Yada yada, Sasha is ok and he goes to see her. The doctor says they can't see the baby. I think it's because he's probably been airlifted out?
Weird part of the show: No Gladys? Huh?

Nina and Sonny at Charlie's... Nina tells him that Sasha had an emergency C-Section. He says he's going to the hospital. Nina says ok... gets really upset. Sonny turns to go and sees her shaky, sitting at the table. Hesitates. GOES BACK to sit with her!! OMG!! They talk about Sasha and the lie she told Nina. They talk about people lying. Nina says that when she met Mike, he was the kindest person she had ever known and she couldn't lose that. SUCH GOOD DIALOG you must watch!!

Jax tells Carly he's leaving town. Blah Blah Blah... whatever. He's out. He says he probably won't be home for Christmas or Thanksgiving. All Carly does is yell at him about Nina. MY GOD SHUT UP!! 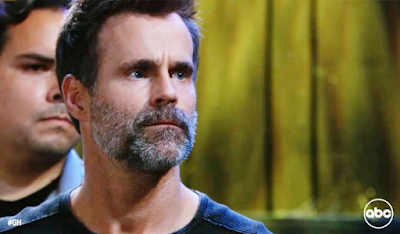 Cassadine Collapse: Peter gets up and picks up a rock to bash in a passed out Drew's head. Drew fights back, Peter runs. Britta is not doing well but yells for Jason. He's in the part of the tunnel that's sealed off. Drew tries to dig him out. Not happening.

Back in the house, Peter is leaving and Robert stops him at the door with a gun. Anna stops on his hand. Next scene Peter is chained. They ask where everyone is. He says the tunnel collapsed. Robert keeps a gun on him. Anna calls Valentin...tells him what's happening. He almost breaks down but doesn't tell her about Bailey. Anna goes to the tunnels. Gets everyone and Drew wants to stay to dig out Jason but the tunnel starts caving in again.

They got to the house . everyone is sitting around saying how they want to kill Peter. Search and rescue is coming for Jason.

Valentin doesn't believe Chase that Bailey is his. Chase acts really mean to Brook and says he has a DNA test to prove it. They argue. Brook sells the fact that yes, Chase is the Dad. Valentin is heartbroken. Chase and Brook Lyn leave. Chase in the hall: I know that Peter is Baileys' father and Maxie is her mother. They talk about the whole ruse and why they did it.

Jax walks in and sees Nina and Sonny talking. He tells her to be careful

Peter talks the idiot WSB agents into letting him call Maxie. He says he's coming home to her.

The end is a shot of the tarot card, laying on the ground.

By kdmask - November 22, 2021
Email ThisBlogThis!Share to TwitterShare to FacebookShare to Pinterest