It was a day that had interruptions for GH again. Just a few minutes in the beginning. 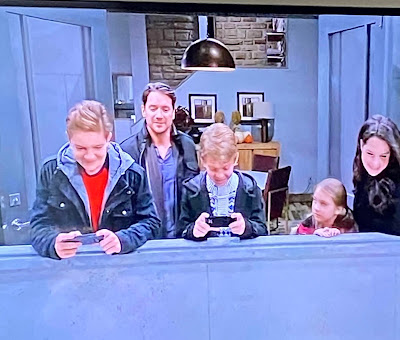 GOD but Rocco and Danny were SORD' A lot..and they both look like Blonde Duggar kids. I mean, I'm shook. They were watching the parade with Sam and Dante from the penthouse balcony. I mean, they couldn't even make Rocco look a BIT Italian? geeeshhhhhh. They talk about going to the Q house. AND how much Monica watches the kids. They sit on the couch while the kids watch movies. Sante end up kissing.

Curtis is talking to Portia about the photo and his father. Whole narrative. Portia thinks there's more to the story and Curtis should find out. Curtis says no.. he doesn't want to know Stella is still recooping from her stroke. So they won't tell her.

TJ and Finn talk in GH... they will be at dinner together. Then Finn is in his office and Chase visits. Chase tells him he's going to spend Thanksgiving with his "baby mama". Tells Finn about Bailey. Finn is happy. Says Violet will be happy.

Brook tells Ned that Chase is Bailey's real father. He's not happy. Thinks she did it because he was hard on her about the stocks.

Olivia apologizes to Austin. She says without him telling Ned about the symptoms he wouldn't have researched and known where to find him. Yada yada. She invites him to the Q's for dinner. He says no. The Qs were too mean to him basically. LOL

By kdmask - November 24, 2021
Email ThisBlogThis!Share to TwitterShare to FacebookShare to Pinterest