Cassadine Island: Peter tries to talk to Britt about being "family". Says she'll have to earn the right to see her mother. She tells him Maxie hates his guts. He says he wants to find his daughter. She said she's kidnapped because of the psycho HE hired.

Jason and Drew are chained up in the cellar. They talk about what Drew did on the bridge since he doesn't remember. Jason explains everything. Drew said he should have killed him. Jason said he needs to get home to his Daughter, Scout. They need to kill Peter.

Sonny and Carly talk at the Metro over lunch. Then MS WU COMES IN! He thanks her for saving Jarly and tells her about Joey. Gives her half the Novak territory. She has a favor to ask him. OMG OMEOIJROIEUORIU!! BRAD IS HER NEPHEW!! She wants him OUTTA JAIL!! They talk about him and the baby/Nelle thing. She says he's very sorry and he's going to not make it in jail soon. Sonny says he won't go to the parole board. 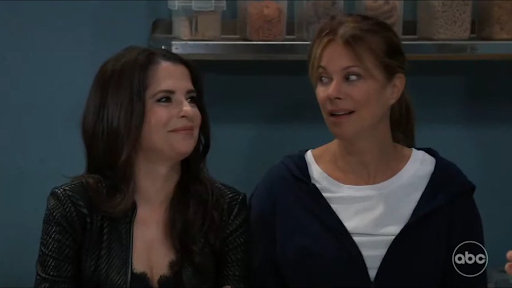 Alexis is packing to leave... Sam and Diane come in to congratulate her. Harmony is sad. Wah. Nikolas shows up and says he got Alexis out. He talks about Nikolas giving up his money. Alexis is happy.

Spencer has to tell Esme that he told his father to go take a hike. She wants to go to a cabin with his friends. She takes a phone call. Spencer asks Cameron if he's STILL a virgin. They talk about boarding school vs being in a small town yada yada. Cam says they aren't ready yet. Esme comes out. They talk about the Niagara Falls road trip and Oscar dying, yada yada. He says that he and Trina were close then. Esme is all @@ Spencer finally tells them that he gave up the money. Cam thinks he's dumb to do that. Spencer says Trina talked to him and she made sense.

Peter takes Britt at gunpoint to the cellar

By kdmask - November 08, 2021
Email ThisBlogThis!Share to TwitterShare to FacebookShare to Pinterest