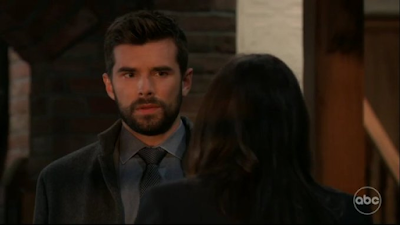 Brook and Maxie talking about Gladys knowing about the baby not being Valentin's. Chase comes in later says he's been studying the case and wants to talk to Maxie. Brook tells him he's being insensitive. Maxie excuses herself to go to the restroom.

Mr. Mystery Hat guy is looking at his phone, Going to go to The Savoy tomorrow when they are having a big act tomorrow night.

Pentonville: Cyrus and Sonny.  They are being all mobby "I wish someone had killed you" said Sonny. Cyrus basically tells him someone is coming into town to fill the shoes of the guys blown up.

THE Savoy: Carly and Olivia go out for drinks. They want to steal Curtis' bartender lol. They talk about how horrible Nina is.  Then they talk about Nedly. Then Leo. Then Gladys walks up to talk to Carly. Olivia gets up. Joey Novak comes by. "HI Mrs. Morgan".. Carly says "Mrs. Corinthos".. they talk about his uncle being dead. Joey goes towards Carly. Curtis throws him out.

Gladys is out there with Brook's credit card ordering up the drinks ...talks to Austin. She says he's no fun but she is..and she leaves the bar to get a table. He thinks back to when Maxie and Brook were all frantic about Gladys. He's suspecting something. Then Olivia yells at him about Leo..again.

GH: Anna visiting Valentin. He's doing well after his operation. Concerned about where Peter is. He doesn't care if Victor is his father but he cares about him being Charlotte's and Bailey's grandfather.

Someone named "KIP" is going to help take down Gladys. As per Brook and Maxie

Gladys is getting shit-faced and Austin is going to get info from her!

By kdmask - November 03, 2021
Email ThisBlogThis!Share to TwitterShare to FacebookShare to Pinterest