Sunday Surgery: Have It Your Way 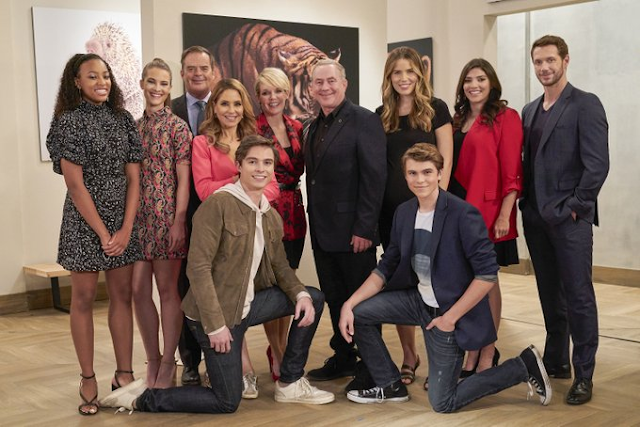 One word to describe this week? WHOPPER. Yep....it was a rootin' tootin' whopper of just everything! Babies being born, babies being outted, daddy reveals, guns, goons, girls and some Nixon Falls fallout thrown in. Phew! Kept a blogger busy!!

You know we must eat a Whopper or a Whopper Jr. in honor of today's show! I chose the above photo because I liked it. That is all. LOL

DADDY OF THE WEEK: We all saw this coming but when it hit, it was a whopper!! In a reveal that seemed to span 7 hours, Marshall Ashford told Curtis he was his long "dead" father. Curtis was stunned and couldn't believe they grieved a man still alive. His mother, aunt and brother all went to the funeral and gravesite. Aunt Stella ended up raising them. With two powerhouse performance, this was an amazing set of scenes. Kudos to both Donnell Turner and Robert Gossett who made this all worth the wait. Now, get Aunt Stella in there who's going to kill him for real after all this! 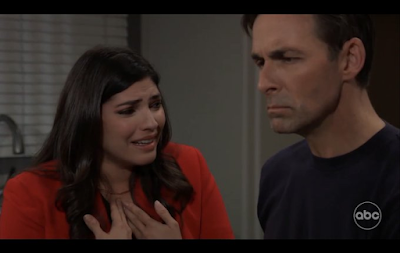 DADDY TWO OF THE WEEK: This took some twisty turns. It seems Gladys was all ready to go and tell Valentin the truth after being locked in the storage room. (see below). Brook Lynn panicked and at the same time, Chase had a mighty lightbulb go off thanks to Bobbie. Bobbie filled him in on Beecher's Corners and the fact Maxie was to give birth there to protect Louise from Peter. Ding DONG!! Just as he realizes this, Brook Lynn is breaking down and confessing that Bailey is not Valentin's daughter. Valentin reels at the information. She's going to explain WHY she did it when Chase walks in and says-- the baby is HIS!! A good soapy shocker but a bit puzzling. Why not just tell Valentin at this point? I mean...he hates Peter...he's a Cassadine and ????? I mean? Anyway, it was a good thread that just kept giving on Friday. 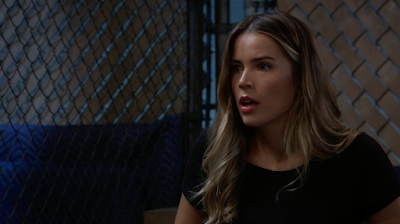 WEDGE OF THE WEEK: Oh, Esme...you schemer you! Trying to embarrass Trina by locking her in the storage room at the Gallery, she instead traps both Gladys and Sasha. Comedy ensues until Sasha's water breaks. Brando eventually finds them and gets Sasha to the hospital. But not before Gladys realizes the last person she saw was Brook Lynn (searching for Leo) and thinks it was her behind the deed. Meanwhile, Esme is not happy when Trina walks out and her plan just went all to hell. 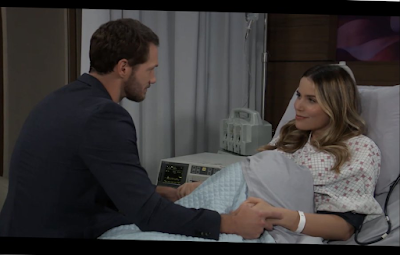 WATER-BREAK OF THE WEEK: While in the storage room, Sasha's water breaks and she goes into labor. This all leads to her going into GH to give birth. At first, it's all routine. They talk about names ("Mike" will be the middle name) and she's walking around. Next thing you know, there's a placenta abruption and Sasha's in for an emergency C-section. The baby is born, taken to the side (we don't hear him cry) and we see Monday that Sasha is hemorrhaging. You know these two were too happy, right? 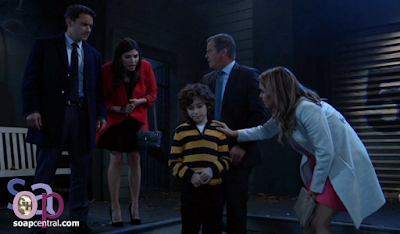 WANDERER OF THE WEEK: Leo sneaks out of the Gallery and everyone is frantic. After a nice gratuitous Dante shower scene, we are all over looking for the lad. Leo was looking at an octopus photo when he left so Ned thinks it's good to search near the water. Ava's security tape confirms that's the way he went. Leo is found laying on the dock, staring into the water. Very very good scenes of ASD by the way. Ned says he read that spectrum kids are often drawn to water and that's where first responders look when rescuing them. Dante agrees. A tearful Olivia realizes she's been afraid this whole time and she and Ned have a lot of talking to do. I thought this sequence was so good and yes, I did tear right up. 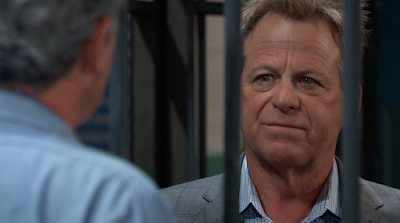 DEAL OF THE WEEK: Scotty got a great showcase for his comedy and acting chops when he pretended to be drunk and got some info out of Ava about Victor. Victor and Scotty teamed up to get a deal with the WSB to grant immunity. Scotty was all ready to have Victor hold up his end of the bargain by telling him where Liesl is. DOH!! Double crossed by a Cassadine? Who would have thought!! 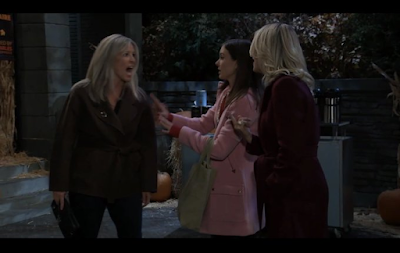 CAROLINE GOES CUJO OF THE WEEK: It happens almost every week with this chick and it was no different now. First, she has a nice quiet (yes, QUIET) convo with Phyllis. Was she trying to make friends with the new lady? Naw, she wanted Nixon Falls intel on "Mike"!! Phyllis was wisely trying to tell her to let it go but you know--CARLY. Off she went to town square where she ran smack-dab into Nina and Wiley. Willow had let them have some cocoa because Wiley was thrilled to see Gamma Nina. What ensued next was Carly screeching and yelling about restraining orders and having Nina's head on a platter. Willow actually stepped in and told her to calm her ish down. Then guess who came into the park next ?? 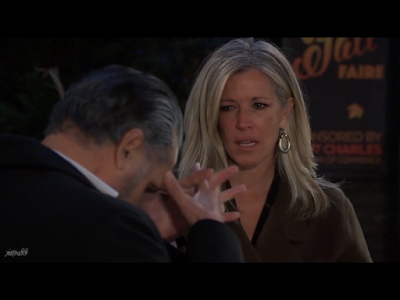 SONNY'S CONFESSION OF THE WEEK:  Oh boy!! Squee!! Sonny sees Nina...Carly sees Sonny seeing Nina. All hell breaks loose. When they are finally alone, Carly goes on and on and on about Nina 'paying the price'. Carly is absolutely baffled by Sonny's lack of anger.  Sonny's still calm and not moving an inch. Why? He finally tells her that Phyllis, Lenny and yes, Nina were his friends and anchors in Nixon Falls. He stops short about the romance stuff because Bobbie walks up. It was coming tho!! Carly knew it and we knew it. Maurice was sublime in these scenes. I love how they are playing his conflicting Mike-Sonny personas. He knows Nixon Falls was a good thing for him. Nixon Falls is the metaphor for the life not led. It's getting good! 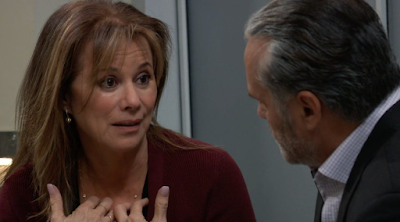 SEXIS SCENES OF THE WEEK: I didn't know how much I missed them until now. With Sonny being all Mike it was just great soap. He asked how she was, forgave her for stabbing Dante with the needle and basically was a decent human being. Even Alexis noticed. More please. 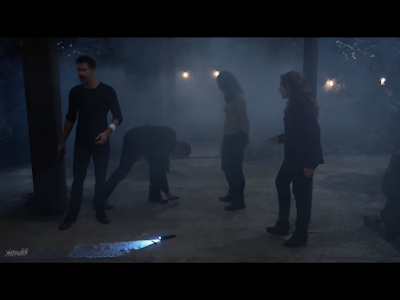 COLLAPSE OF THE WEEK: Fitting "END"? For the whole Mind-Mapping?? Who knows. It's Cassadine stuff (they never die) and it involves at least 3 people that have been presumed dead a total of at least 1-2x each. So...you do the math. Anyway, all you need to know is that everyone (Liesl, Drew, Jason, Britt, Peter and some guards) was in the tunnels under Cassadine Island. People shooting. And...it starts to collapse. If you know that Burton is off the show due to non-compliance then you know he will be buried and presumed dead. I guess until the COVID thing is over or if he caves and gets the vax. My one big take away from all of this is that I like Cameron playing Drew. Peter's not dead yet so... I'm not jubilant at this time. Maybe next week? 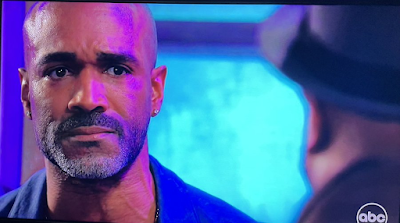 SCENE OF THE WEEK:  Father and Son. Like I said, Donnell and Robert just hit this one out of the park. The tears...the photo... it was so good. 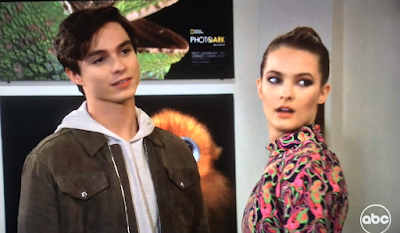 LOOK OF THE WEEK: Be the girl that Spencer looks at like this. He was so proud of Trina. Not even Esme's digs about her could turn that off.

LINE OF THE WEEK:  "Believe me, I know...you don't want a third party in your marriage". Bobbie to Carly. Thing is..CARLY was the third person in her marriage with Tony!! LOL 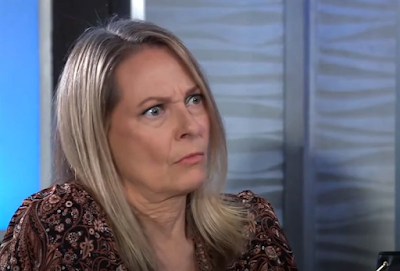 FUN OF THE WEEK: And a nice surprise! Gladys actually moved the story along after finding out that Kip was fake. She helped Sasha with her labor, bought some celeb mags, got Valentin thinking about Brook's deception and did it while being funny. She even made me like Brando a bit. 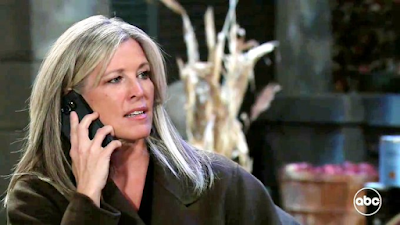 KAREN OF THE WEEK: Carly on the phone to the PCPD about Nina was so "I'm calling management"!! LOL 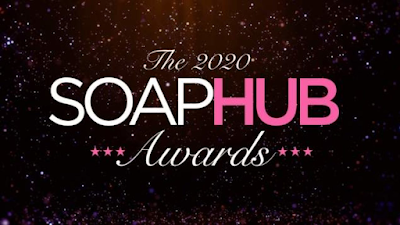 NEWS OF THE WEEK: Laura Wright, Nicholas Chavez, Steve Burton and Cynthia Watros were on CBS' The Talk to receive fan-voted awards. Laura and Steve took fave actors on a soap, Cynthia and Laura got the fave feud and Nicholas Chavez won fave newcomer. One fun note: Laura Wright said she also loves "Sonny and Nina"!! 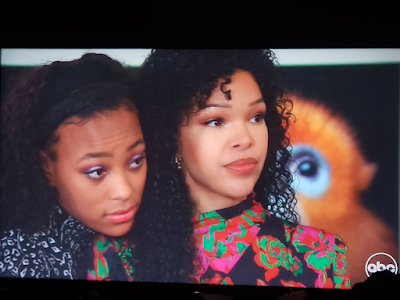 The Gallery Ark Show from National Geographic was a success

Kip is found out to be a cater-waiter and Gladys is pissed.

Leo goes missing and is found on the pier; Olivia realizes he needs to be looked at by a specialist

Sasha's rushed to GH and complications hit with the baby

Carly catches Nina with Wiley; melts down; Sonny tries to calm her but makes things worse

Willow, Michael and Wiley will go to NYC for the holidays

Sonny and Alexis have a chat about love and life

Phyllis moves into Charlie's Bar; decides to give Carly some advice

All hell breaks loose on Cassadine Island and the tunnels collapse 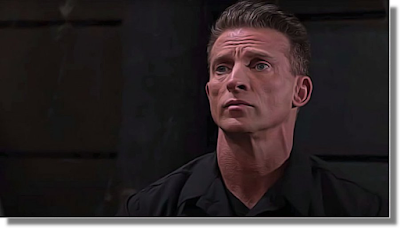 SPOILERS: ***THERE will be a rerun on Thanksgiving Day and No new GH on Friday due to football+**  Sasha is in danger of dying,  Olivia apologizes to Austin, Cassadine Island survivors crawl out of the wreckage. ALSO: Ingo Rademacher's last air date is November 22nd.  Get all your scoops on Diagnosis Daytime. 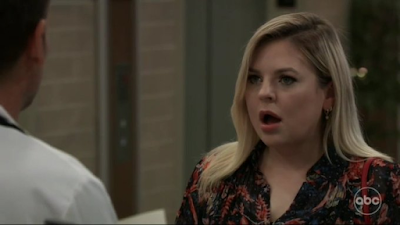 A huge week. The show is getting so good at having the cast interact, I almost forget what it was like when we only had 2 in a scene day after day. Characters really move from set to set as well. Things are coming to a head with Leo, Cassadine Island, Baby Brando, Baby Bailey, Nina and Sasha and Esme. These are the exciting days. I'm loving the Nina and Sonny story and his journey post Nixon-Falls. The other shoe to drop is the exit of Steve Burton which will probably be another 'presumed dead' deal until all of this blows over (if it blows over).
Only three shows next week...then feast!!

By kdmask - November 21, 2021
Email ThisBlogThis!Share to TwitterShare to FacebookShare to Pinterest