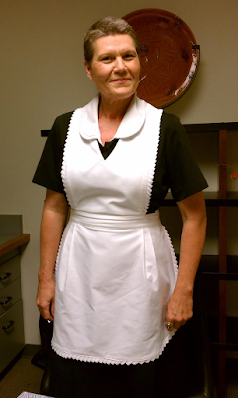 Unfortunately Bergen passed away... Maurice Benard tweeted about her. She had Wilson's disease. I loved her as Alice. RIP.

We start with DANTE IN THE SHOWER. Thank you. Olivia tries calling him about Leo being missing. He gets to the gallery in about 2 seconds. That was just a nude scene for us LOL .. Everyone tries to find him.  They look at security footage, he's walking to the harbor. Ned figures out he was looking at the octopus and Fish pictures. Olivia and Ned find him on pier 54..he's laying on the docks. I think he's looking at the fish. He's on his stomach. Doesn't look up when people say his name. He was looking for an octopus like in the pictures. Acting very spectrum. Kid did a good job. Ned says he knew to look by water because he was reading about spectrum kids. First responders are taught to look by water and Dante says it's true. Olivia is sobbing, says "I'm scared Ned".

Sasha's water breaks. Then contractions. Gladys is being calm and helping Sasha. Pounds and Pounds.. finally Brando gets in. Says the door was wedged shut. Gladys thinks Brook Lynn did it because that was the last face they saw (she was searching for Leo). They make it to GH.

Sonny and Alexis hug in GH. He tells her he forgives her for stabbing Dante with the needle. Gives her advice, they talk about Kristina. He was totally "mike" in that scene!! They keep talking about him being gone and not being in crime... VERY GOOD SCENES.

Carly goes to Charlie's to talk to Phyllis about Nixon Falls. Phyllis is going to live in the backroom for now. She wants Simple. Carly asks about Sonny in NF..Phyllis is wary. They have coffee. Talk about running a bar. Phyllis says that it was great when Mike came along. Then apologizes for calling him Mike. Carly says, well, you didn't know, but NINA did. She says she is so angry with Nina, yada yada. Phyllis asks why she wastes so much energy on this anger.  Says that Sonny and Nina are moving along and Carly should too.

Austin and Maxie talk about Brook Lynn and Gladys. Boy, Austin just isn't doing anything for me. Maxie is all afraid that Austin will find out from Gladys but she sure is showing her hand!!

Willow and Wiley in the square. He sees Nina and runs "GRANDMA"!! Willow is like: Um... They get hot cocoa. Then Willow tells Nina that she's not to see Wiley, and steer clear. Nina is like Ok, I'm sorry, it was an accident (which it was). Willow trying to act mean was laughable.

Carly sees Nina and Wiley in the PARK!!

The baby is a boy...Brando says he looked at the gender on the phone. (not born yet tho)

By kdmask - November 17, 2021
Email ThisBlogThis!Share to TwitterShare to FacebookShare to Pinterest