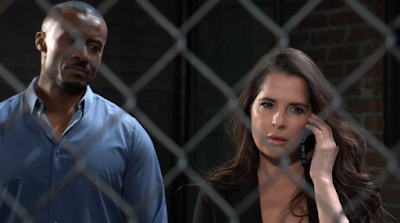 Sam and Shawn go to see Naomi..they say they are her best shot at bringing her home. She says she doesn't know where she is. Sam gets it out of her that she's had contact since Hayden's been missing.  Shawn says "think about what Violet must imagine about her mother". Naomi says "Its' BETTER THAN THE TRUTH" ...which SHE says is that Hayden doesn't like to be a mother and doesn't want to be around Violet. Um.. I think she's lying. Oh she is. They figure out she was giving them a clue-- with Hayden's wrong middle name. Then they think Naomi was trying to give them a clue. Then some guy is in Naomi's room..but we don't see his face.

Scott and Austin!! LOL Scotty says he's great on a diet of "schitznel'!! He wants to know when the Q money is coming through. Scott thinks that Austin should tell about Michael's affair with Willow to fight them. Austin says no. He tells about a letter his Dad got in 2011 that said Edward was rethinking his will. They need to find proof. Austin thinks Chase will search the Q house because of his broken house even if he is a cop.

Chase flashes back to Michael putting the ring on Willow's finger at the wedding.  Then he tells Brook Lynn he's happy at the Q's.

Willow comes in and sees Michael says "this can't go on"...SHE'S going to tell him when he takes FIVE STEPS. PFfffffffffffft . They walk in where Brook and Chase are. Nothing much happens. Brook calls Michael "Vanilla" AHAHHAA.. Willow says he's not. (Um beg to differ)

Alexis and Nik find the letter Ryan wrote Spencer. Ryan tells him to keep going in his "endeavors" ..Nik figures out that Spencer could be behind the stalker stuff. Alexis scofffs. Nikolas thinks it's true. Alexis tells him not to confront Spencer because they just got their family back together.

Spencer and Trina at the pool. HE says he's not as bad as Joss says he is. They talk about her mother.  He says he's always doing things without thinking and hurting himself the most.  They are getting closer. He says he's going to have that big party.

Austin talks to Chase. He's going to try to convince him to search for the Will.

Spencer takes the letter to Spencer

ALSO: TRIBUTE to Stuart Damon. I hear there's going to be a show devoted to him in the fall.

By kdmask - August 09, 2021
Email ThisBlogThis!Share to TwitterShare to FacebookShare to Pinterest