Ava and Shawn.. he was in jail for six years. Oh she's making zexy eyes at him. APPROVED! Oh damn, she just wants him as a bodyguard. He says no, he already has s job.

Spa Jail with Alexis, Nikolas and Sam. They talk about Ryan. She says he can communicate with his eyes. Maybe behind the stalker. Then Sam sees Harmony. Has little reaction. Nikolas asks her if she is helping Ryan with the stalking. She says no... Ryan has written letters but most are returned. She can't show them to everyone, it's right to privacy. Sam leaves. Then, Harmony walks by and drops Ryan's folder "I hope I don't misplace this for 20 minutes". She IS helping them.

Laura is talking to Dante about Lulu. OMG THEY HAVE HER IN A GIANT WINTER COAT !! WTF!! OMG!! Anyway, Lulu's news isn't good. She's not responding to any treatment. Laura says she doesn't expect Dante to wait for Lulu. 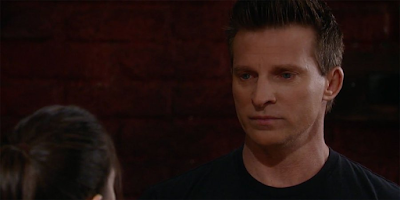 Dr. Obrect confronts Jason in the gym. I wish she'd kick his ass. He says he knows he let Britt down. They just talk. Anna comes in... spots Lesil on the punching bag. Then Anna punches.

Kelly's.. Liz, Finn and Violet having milkshakes after baseball. Violet's grandma walks in..Hayden's mother. Violet asks her where her mommy is.  Finn finally tells her to leave. She gives him her number and goes.

Jax and Carly argue about Lulu's safety. She tells him she has a bodyguard. Jax is like OH GREAT!!

Jason confronts Joey Novak at Kelly's. Tells him to stay away from Joss. Grrrrrrrrr Grrrrrrrrrrrr.

Alexis finds a letter written to Spencer from Ryan.

By kdmask - August 06, 2021
Email ThisBlogThis!Share to TwitterShare to FacebookShare to Pinterest