Stella going to get out of the hospital. Curtis wants her to stay with him.

Dr O and Liesel make out at the pool, Britt is like OH MY EYES lol

Jason is feeding Donna... she calls him Daddy.

DAMN IT...here in NY I got interrupted by Gov Hochul ..our new lady Gov. ..that lasted until 2:30 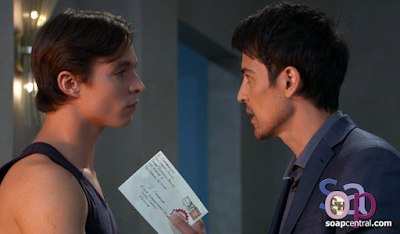 Nik shows the letter to Laura and Kevin from Ryan to Spencer. BTW, I feel like Spencer would have on really expensive ripped genes and his eyebrows groomed. Spencer leaves. Laura doesn't believe Spencer would side with Ryan to do anything. :cough: Kevin is going to see Ryan at the Spa jail.

Ava sides with Portia and tells Trina that her mom's affair is none of her business. Trina is like: WHAT?? Ava says she should have compassion for her mother.

Britt gets invited to Spencer's party. She's like, hell no, I'm not Gen Z lol

Liesel is going to St. Lucia to look at Hungtinton's Disease treatments, wants Scott to go with. He says yes.

END:
Nikolas goes to Ava ...says he knows who the stalker is

By kdmask - August 11, 2021
Email ThisBlogThis!Share to TwitterShare to FacebookShare to Pinterest