St. Jaysus is in the water! He's out!!! YELLIN for SONNAAAYYYY.. Chopper is out looking too! Manhunt! OMG they bring a BODY BAG when the cops come out. Jason is all nervous.  Its' Julian. Oh, he's DEAD DEAD. I thought they'd let him just be missing.

Dante is talking to Carly about the house Sonny bought for he and Lulu. He thinks he paid the difference. Carly and he talk about how GENEROUS SONNY is and what a GREAT GUY he is. LOL. :GIGGLE:  Dante meets Donna. HE wubs her (we don't see her tho)

Anna and Valentin talking about Dante and maybe he's not over the PTSD. And WHY would the WSB let him go. She and Val figure that the WSB wanted something from him.

THE BABY for Paxie? It's a :  GIRL!  Maxie and Anna leave to talk about the wedding. Valentin invites Peter to sit and talk. Peter is glad the baby is a girl so he doesn't have to wonder if she'll turn out like Faison. BUT.. Val knows he's Alex's kid. Doesn't say anything.

Poker game. Chase and Dad talk about being a family. Chase looks just like him. Finn...um, not so much lol . Dad says he was so much harder on Finn than on Harry.  Harry leaves for a minute. Dad says that Jackie told him it was also her fault Finn wasn't happy with the wedding. She said it probably was too soon. (not the truth tho). They leave and Anna is home. Finn says he's going to tell her the truth about why he was estranged from his family all these years. 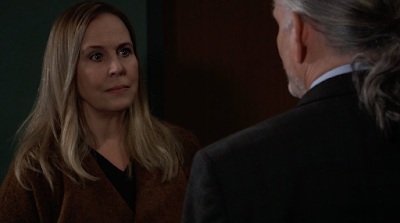 Gray Family. Aww.. Florence doesn't want to see Cyrus. He cries and says to look at him like she's his mother. She's like NOPE! Laura takes him out of the room. She says he can't make his mama love him. She also asks why he led her on a goose chase instead of just telling them they are related. He says she never would believe it unless she found out herself.  Then they argue and she blames him about Lulu. Cyrus says "careful, don't make me more of an enemy"... Martin comes out and tells him "not to talk to our sister that way"!! YEAH!!

Cyrus goes into the room to talk to mama alone. He shows her all his money, credit cards and his badge as the admin of GH. Says she should see all the good he's done. He's not a delinquent. She doesn't care. He cries. Jeff Kober is great in this.

Jason arrives home (in about 3.4 seconds) and Carly is like WHERE IS SONNY?

By kdmask - December 21, 2020
Email ThisBlogThis!Share to TwitterShare to FacebookShare to Pinterest