Willow and Sasha. Willow is mad about Sasha lying. "You were my first friend that was a girl" ...Sasha says they did it for Wiley. Willow tells Sasha that she should go to GH and find a counseling group.

Michael and Carly.. Carly wants to apologize for not telling him about the Sasha/Chase lie. He says NOPE. She thinks he likes Willow now. He says that's between he and Willow.

Sonny and Diane at the Metro Bar. He wants her to find out about Martin Gray's connection to Cyrus. They go sit and talk with him. Sonny asks if he's working for Cyrus. "I have no idea what my brother is up to" says Tad! OH HE SAID BROTHER!! Diane is like WHAT!! @@ !!! LOL Sonny wants to know where they are from and why they are in PC now. Martin says he doesn't know what his brother does but he's helped their mother out with her medical expenses now so he does talk to him. 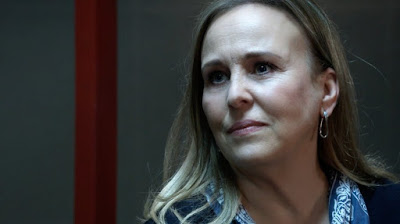 Laura is at the firing range, shooting off a gun. Cyrus is next to her. She says "oh I was just thinking of you"!  He says he wants to hear about her history from her own point of view and he'd never hurt she or Lulu. "Then get out of Port Charles' she says. YOU HAVE TO WATCH THIS TOO. He tells her she has a wild streak, just like him.

Curtis and Jordan blabbing away about the Cyrus case. Cyrus has a lead on the Gray name. He leaves the apartment. Epiphany comes over and tells Jordan the wheels are coming off her cover-up about Taggert being alive. She tells Jordan he's been around town. LOL Jordan didn't even know he was back!!

Curtis goes to the gun range. He and Laura figure out that Florence might be in Vermont based on what Cyrus said. My friend smoosh name for Laura and Curtis is: CURLA They are going to Vermont to find her.

Sam tells Jason the bomb was the last straw for her. She couldn't take it if one of her kids died like her brother did. "If you want out I won't fight it". They cry.. so if you're a JaSam fan you should watch. Jason basically says he can't leave the biz. WATCH IT..Steve and Kelly are good. Sam and Jason decide the kids must come first. He says he's loved every day with her. Thanks for giving me a family...yada yada.

END: JaSam break up. Curtis and Laura are going to Vermont. Jason and Sonny are going after Julian.

By kdmask - December 09, 2020
Email ThisBlogThis!Share to TwitterShare to FacebookShare to Pinterest