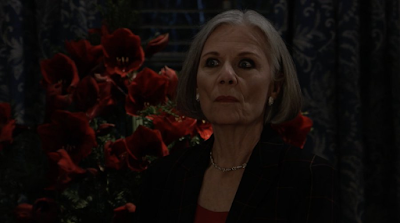 LOVED Diane and Alexis. Diane is telling her LIKE IT IS!!  Oh, Alexis has to go to rehab or jail? LOL

Finn and Anna. Will he tell her? Oh yep!! Great scenes.

Dante shows up at the Q house..He's like WHAT IS UP with you two?? Olivia finds out Julian is dead.

Carly and Jason go look for Sonny.  You know if Sonny died it would open the canvas right up. Michael could get all mobular, recast Morgan for a power-struggle and then Kristina wants in. Oh, I can think of a million things.

OMG Molly bailed Alexis out of jail and they are going to TJs' and Jordan's! Alexis immediately steals some vodka. Molly pleads with her not to spill the secret about Brando. LOL I totally forgot Alexis knows!! Alexis drinks more vodka. She brings up that Taggert is alive. Pfffffft. TJ and Molly don't know. Alexis says to Jordan: You must have been surprised? Jordan is like Um, NO. I knew. Anyway.. Jordan leaves to go find Curtis. Molly figures out that Alexis is drinking-- she kicks her out. Alexis is like: It's Christmas. Molly says you're a mess, get away from me!

Sam ID'd Julian's body with Lucas. They talk about how bad their Dad was.

Laura and Kevin. They run into Marty. Kevin knows he's her brother. They are going to see the elderly patients at GH because Martin brought them gifts. Then they will have dinner at Kelly's before Laura goes to see Lulu. Um, I HOPE they remember Laura's birthday.

Sasha and Brando. Still chem testing. They are at the coffee place in the park outside. Getting Hot Cocoa. 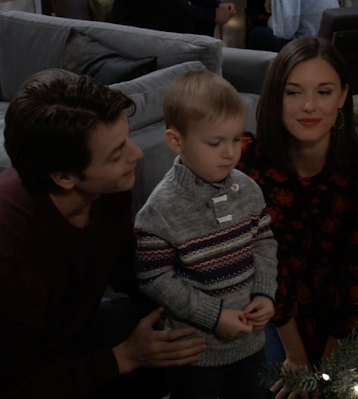 At Corinthos: Wiley Michael and Willow... Joss and Jax. Carly and Jason come home without Sonny. They aren't telling anyone he's missing.  Jarly talk about having each other. He gets a text from Sam though and she tells him to go.  Carly keeps it together for awhile but Jax finds her crying outside. She tells him Sonny is missing.

Sam tells Jason she wants him to stay the night at the house. Weird. Oh! He has to sleep on the couch with Danny tho.

Trina yells at Curtis for lying to she and her mother about Taggert being alive. He says he never lied to her. He didn't know. Trina is like: WOW, your wife didn't even tell you?!!  making him feel worse. Portia convinces him to go home.

MUSIC MONTAGE-- people doing stuff..yada yada. Alexis sees that Julian is dead when she looks at her phone.
Cop cars show up at Carly's... 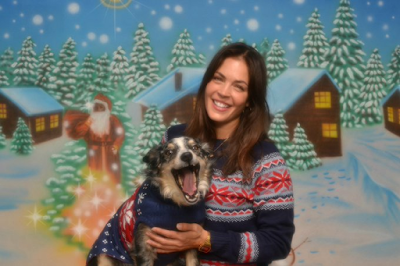 Kelly and her friend say Merry Christmas on Twitter!

By kdmask - December 23, 2020
Email ThisBlogThis!Share to TwitterShare to FacebookShare to Pinterest