Yesterday was too much of "The Four"..but Violet? Delightful! 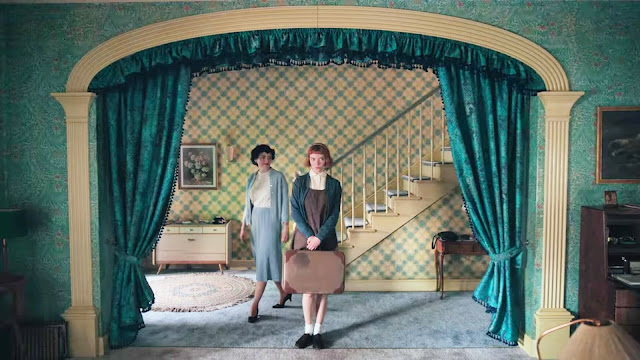 If you haven't watched The Queen's Gambit--ya should (NetFlix)

Curtis and Jordan are at home and she made the house look "Mexican"-- and Curtis is shirtless. They talk about their anniversary and missing Thanksgiving.

Danny and Sam playing a board game. Danny wins. Sam and Jason talk about Julian planting the bomb at the Metro Court. AND about the entire baby WILEY STORY!! ahahahaha.  She freaks out. AND he tells her that he jumped off the parapet. She's so upset and sick and sad. Of everything.  Says Mobsters never get happy endings. EVER.  Jason leaves. Danny talks to Sam about Jason being gone and how they can never plan anything.
Jason comes back later and tells Sam he has to leave. She gets all upset and says she's done and not to come home. Okayyyyyyy?

Martin Gray runs into Sonny at the Metro Court where he invited Cyrus to meet him. Sonny asks if Julian came to him for help. "Marty" says yes. Sonny then calls Jason because he thinks he might know where Julian is.  **PS Someone on Twitter reminded me that Moe was on AMC as Nico! Nico and Tad LOL
Sonny sees Martin and Cyrus together.

Sasha gets released from GH. She's going to do a trunk show --Epiphany wants to know if she's going into treatment. Sasha says she'll look into it. Sasha goes to Cyrus' to get her her coke from the bathroom. IN the meantime, Curtis is telling Brando his first assignment is to get Sasha hooked on drugs because "addicts are easier to control" and then she won't tell on them. Sasha is pissed at Cyrus for not visiting her. She thought they had a 'connection'.  Cyrus leaves. Sasha tells Brando she wants to find her drugs to turn in Cyrus. Brando tells her to leave. SHe's in danger yada yada.

The kids are skulking around trying to find out what happened to Taggert when he "died" at GH. They are trying to break into the system with Liz' log in. They get in after 3 tries. GEESH, great security LOL

Trina distracts Epiphany while the other 2 are doing the computer stuff. She asks what Epiphany did to help save her Dad. Epiphany looks sheeepish. Um.. WHOOPS.  She catches Cam with the laptop but he says his mother and he have the same one. Then after they leave, Epiphany notices someone logged into Taggert's records.

***NOTE: The actress that plays Jordan tested positive for COVID! I HOPE Curtis is ok

By kdmask - December 08, 2020
Email ThisBlogThis!Share to TwitterShare to FacebookShare to Pinterest