Trina and some weird guy in the coffee shop. He says he has info about her father. Then he tells her to wait. LOL Oh !! CYRUS comes and tells her Taggert is alive!!

Carly and Taggert are talking. He's mad there's no body guard on Trina. Carly and he talk about Cyrus. Nothing big. Taggert does mock her tho..then Carly tells him everything is his fault.

Cyrus tells SaSon that Julian planted the bomb. He says that Julian wanted Jason killed and went to him first to have the job done. He said no. Yada yada, then he leaves. Sonny and Jason think he's trying to throw Jules under the bus.

Ava flashesback to Julian jumping. Nikolas startles her. They talk about Lulu being in a coma and about siblings. They talk about their marriage and agree they are married for real now.  Ava tells Nikolas Julian is dead "because of her" . 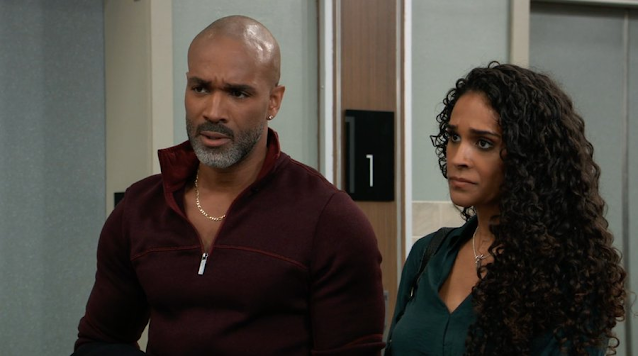 Laura talks to Curtis and Jordan, she wants the info they go to Cyrus.  Curtis talks to her about  the police record. She tells him it was about her killing David Hamilton. Then he asks her if she knew a Florence Grey--she says that she was her biological father's mother. She tells him that Gordon Gray was Leslie's mentor and she got pregnant by her. He told her the baby died in birth and sold it to the Vinings (Laura's adoptive Family...Amy was her "sister").

Martin goes into his office..he notices the blinds are down and he knew he left them up. He turns and maces someone--IT'S JULIAN!!!!!! OH HELLOOOOOOOOO! THAT surprised the heck out of me lol. Julian wants help to get outta town. He found a photo of Martin that has "secrets" so he wants his car and money. Martin gives him a pile of money.  Julian leaves.

By kdmask - December 03, 2020
Email ThisBlogThis!Share to TwitterShare to FacebookShare to Pinterest