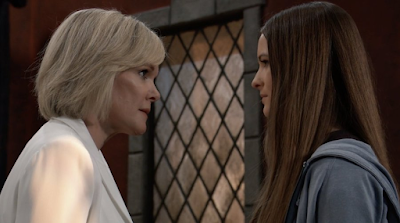 So I watched yesterday's show...!!!!! OOOOOOOO HUM DINGER!! Loved the Trina/Spencer looks when she was on the stand EEE!! Esme!! Parapet!! WOW! Another one gets pushed over. LOL We know she's probably not dead but.. it's so soapy 101~

Shows Esme falling again and she has the letter in her hand.  Nikolas tells Ava not to call 911.. and he's going to clean up everything. She goes to the master bedroom.  She finds a giant bruise on her collar bone. Covers it with make up. Nikolas comes back. He can't find Esme, but has her shoe. Ava worries because she survived the parapet fall herself. They talk about the staff hearing the fight. She thinks she'll be implicated no matter what happens. They figure out their plan. Nikolas hid her suitcase. 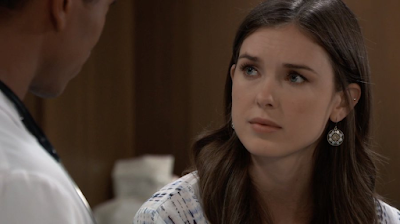 Willow thinks about her cancer diagnosis. She consults with Terry and Britt. They wait for Liz to get back with the final results but Terry is fairly sure it's leukemia. They want to do a bone marrow test. Willow insists they do it that day. She won't tell anyone. In a split second, they get her in the op room and do the procedure LOL GEESH, even for GH that's fast.

Later, she finds Michael. She's all dressed and ready to go!

Curtis steals Oz folder and takes a photo. Jordan sees him. Oh she didn't see him take a photo of the report. They talk about getting evidence that Esme visited Oz at the apartment. They talk about the drug in his system and how Spencer asked Britt about the same drug. They figure out Trina was drugged by Esme. They want to talk to Esme.

Trina admits she had feelings for Spencer but doesn't anymore. (BULL SHEEZE) They talk about Esme being jealous and how Trina would never hurt her friends. The ADA tries to get her to admit she used her phone to film everything. She denies it. So.. back and forth and the closing arguments are given. Trina talks to Rory after the trial. Spencer wants to talk to her and Joss is like, um.. let's just leave it at you doing a good thing, ok?

Liz sees Peter at the bottom of the stairs, almost falls. Then she hears "Daddy..Daddy.." in her head. She sits. Finn finds her. He tries to comfort her. They get up to leave and leave Willow's chart in the hallway. They go to his office. She drinks water. Shrugs off falling... Finn says she needs to see a neurologist. She gets mad. He says do it for your kids. "you think I can't take care o my kids"??!!

TJ tells Curtis if they take Oz out of his coma, he could die

By kdmask - August 02, 2022
Email ThisBlogThis!Share to TwitterShare to FacebookShare to Pinterest