Dante and Jordan. He talks about not taking the Manhattan job and not wanting to lose out on any other jobs zzzzzzzzzz

Sonny has a job for Dex. Looking for jurors on Trina's trial. He wants him to talk to the jury foreman and strong arm him. Dex finds him at Kelly's. Talks to him RIGHT OUT FRONT? LOL (see below)

Portia is telling Curtis and TJ all about the trial... so if you missed it, there it is. zzzzzzz She's worried. Curtis and TJ tell her their plan to wake Oz up early. She says TJ can't do that to his career. She tells Curtis later SHE will do it herself. Great scenes from Brook Kerr today. The only part worth watching (besides Sasha smashing the shit out of the Kia)

Carly and Joss talk at Kelly's to catch the audience up on things (zzzzzzzz). It's just so boring.

Joss walks out of Kelly's and finds Dex talking to the Juror. She's like You're the JUROR GUY. STUPID DEX. Guy leaves. Joss yells at Dex for working for Sonny. :eyeroll:  Dex has  to answer to Sonny after. 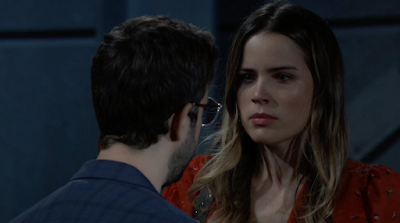 Sasha smashes the CRAP out of the reporter guy's car with a sign! HOLY SHEEZe!!! LOL She is STRONG and just destroys the front of the car. She's screaming and clubbing it. Brando comes out and tries to stop her. HE finally restrains her. Dante arrives. Schmalz wants to press charges. Sasha is catatonic.
They go to the PCPD. Brando calls Sonny who suggests stuff and basically ends up not helping LOL its dumb.

Sasha is booked and put in jail

By kdmask - August 04, 2022
Email ThisBlogThis!Share to TwitterShare to FacebookShare to Pinterest