I COULD CRUSH YOU

Anna's in the cellar. Alex tells her that Peter is her son and she's going to take over Anna's life and no one will know. She says she slept with Faison because she knew he was obsessed with Anna and she could get secrets out of him and get promoted. Anna says "I know you don't want to be a mother or a grandmother, so why are you really here"? Alex says people are coming for her from all sides and she needs to hide out. SO, she'll become Anna and there can't be two of them. Valentin comes over after talking to Peter and figures out that it's Alex, not Anna.  He asks Alex for water..then Anna breaks free of her tape and yells. He is going downstairs. Then Alex hits him with a syringe.

Peter tells Valentin that Helena called; Valentin freaks out LOL Then he totally figures out it was SPINELLI MESSING WITH HIM. UGH He tells Peter to just leave Spinelli alone-just don't answer the phone anymore LOL. Peter wants revenge. Val says if he does that Jason will come for him. Peter then gets Spin at the bar and tells him Helena called. Then tells him he knows it was him and to back off. Peter is MAD!! ANGRY PETER! I like a mean Peter better btw.

Sonny has Ava over. Shows her a pic Avery drew then asks why Ryan Chamberlain would call him. Ava's like I don't know. She's such a good liar. She said he's playing games and not to go see him. Sonny says maybe, he'll decide.

Julian is panicking. Leaves a message for Ava. Shaky cam at the bar. Weird. Ava comes back from Sonny's and tells Julian he should take Nikolas' offer up on disappearing. 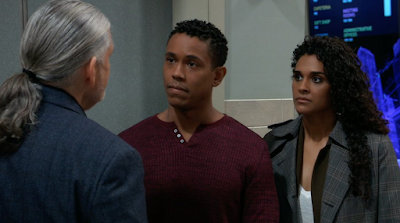 Cyrus harasses Portia in the hospital by asking about Trina.

Franco goes to see Kevin about his tumor. He is worried more about this psychosis coming back than he is of dying.

Taggert is in Kate Howard's house

TJ goes to his mom to get the permit for the protest against Cyrus they want to hold at GH. She told him she rejected it. He's pissed off. She's like too bad. Cyrus over hears them talking about the protest. Jordan says nothing as Cyrus lays into TJ about getting back to work and not bothering him.

OH SONNY GOES TO SEE RYAN! That was fast!!

Julian tells Cyrus he's ready to make a deal with him.

By kdmask - November 03, 2020
Email ThisBlogThis!Share to TwitterShare to FacebookShare to Pinterest