So I finished yesterday's episode!! Joss didn't kiss Dev back. I like Dev acting like a prick. I'm so happy he's being a Jerk.

So, Julian got one up on Sonny about the whole Nelle thing and Taggert!!? NICE He tells Sonny if he does anything he'll tell Cyrus about Taggert.

Finn needs surgery. They might remove the sack around his heart??

Valentin and Robert get ready to go get Maxie and Anna and they walk into the hospital! Peter hugs her.  Anna and Chase in the chapel was a good scene.

Valentin wants Charlotte back? hmmmm. I'm starting to like Tad's accent a bit. So..sue me. 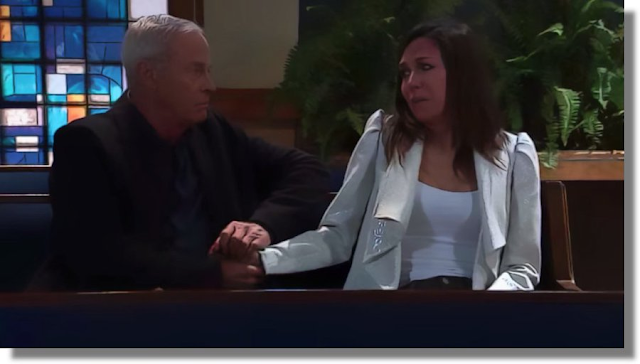 So, Alex slithers back into the water.  You know she's probably not dead. She does a number on Anna tho about not going to get Peter and raise him. That's why her memories were switched.

Anna in the chapel with Robert. He says there's been no body found. She says "it's over". Then Robert asks what the test results were from the hospital "Is Alex Peter's mother"?? She yells at him to stop his obsession. She just killed her sister and Finn is fighting for his life (she's deflecting). Never answers him.  Epiphany tells her Finn is done with the surgery and he's stable.

Olivia comes to GH and finds Robert. He says he messed up with Anna.

Willow embraces Chase she said she had to come. Chase talks about Finn. Finally Anna tells him he's stable and out of surgery.

Maxie is scared Finn is going to die. Epiphany tells them they are ok. Peter flashes back to Alex telling him she can see into her soul.

Jordan and Curtis are looking at the house that Cyrus sends money to. Oh, Oregon!

Lulu talks to Cyrus at #GH.. basically  taunts him. Dante happens to be at GH too and tells Cy to back the hell off. Lulu gets mad at Dante for interrupting her.

Ned wants to help Alexis. She says "no you just don't want me to spill about us sleeping together"

MY STUPID TV FROZE at 2:45!! I couldn't get it back on the internet in time. Weird, because my computer worked. Wah..
SO I'll finish today's tomorrow! Sonya will fill you in in the comments about the end of the show

By kdmask - November 10, 2020
Email ThisBlogThis!Share to TwitterShare to FacebookShare to Pinterest