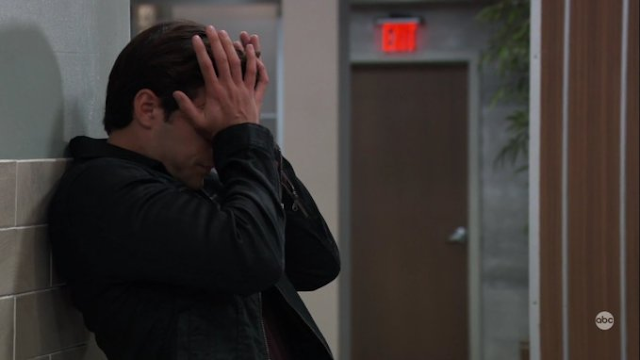 So, there I was, complaining on Friday that the show was boring (that day) and BOOM! All hell broke loose!  People coding, Alex sliding away-- seizures, drugs, sex and almost some rock and roll! No wonder Chase has a headache!

Pancakes. That's what I want. 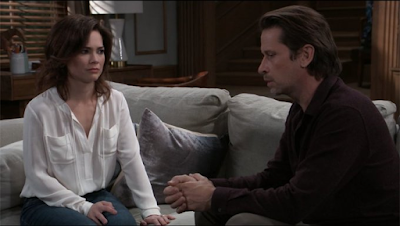 SECRET SHARING OF THE WEEK: Oh, Franco's Tumor secret only lasted like 5 days? That's a record for GH! Liz was rightly upset and really wants Franco to get another opinion. Franco is scared he's going to go all JAMES Franco as the tumor grows. I don't think he's going to die so I'm wondering if Kevin's brain study will have anything to do with the conclusion.

HEARTBEAT OF THE WEEK: BLOOP! All you need to know is that Sasha was hooking up with Cyrus to get some "blow" (as she called it) and it looked like a bad '80s movie. BUT! She had a seizure and heart attack looking episode after taking some powder and now is flailing all over the floor. Cyrus is upset. Brando rushes in. We'll see if she makes it Monday. 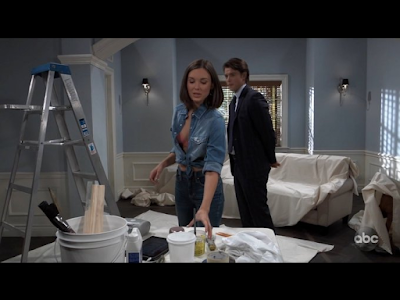 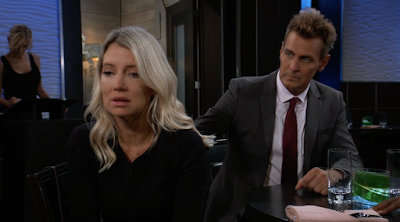 PUZZLE PIECE OF THE WEEK : Oh I see another LIE coming. Or... lie by way of non-admission.  Nina finally finds out from Phyllis that her baby girl was given to a couple in Florida (where Nelle is from). She doesn't know her name or any other details but she knows that the necklace was given to her as well. Adorable Avery found it in the woods and Carly finds it in her backpack. Carly's going to call Jax. Heh. Will Jax tell Nina? Another bond between Jax and Carly. BUT--tell me, Nelle is dead--right? Isn't this a non-happening? Or is she alive? What? 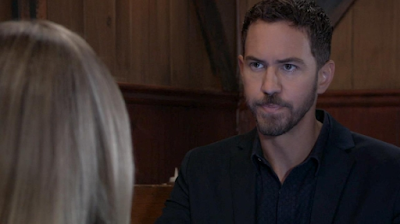 THE PETERING OF THE WEEK: Yep, it all PETERED OUT. Damn it. Just when we thought the whole thing would be over....it's not! Why? Alex slithered into the water and Anna's not going to tell him she's not his mama.  Lord have mercy on me but Dante better take that guy out with a big bullet to the brain. 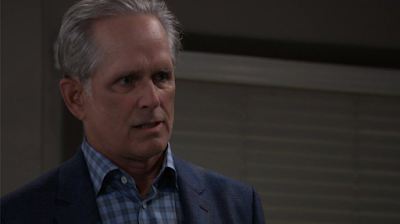 RECOVERY OF THE WEEK: Finn! Up, talking and seeing his Daddy!  This guy is a good actor and Chase even looks like him. Win-Win. 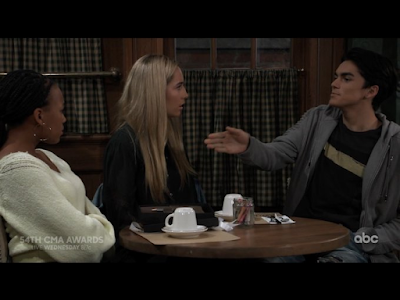 TEEN SCENE OF THE WEEK: Must be Cam has it off because we just got these three arguing over what everyone's feelings are. I really wish the dialog was snappier--it's just not 'teen worthy'. Plus no one is ever on their phones it seems like. I DO appreciate a more pissy Dev though. At least he as some personality. 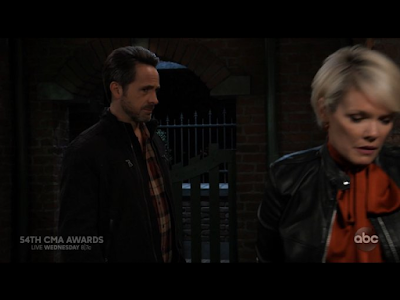 THE JULIAN FACTOR: The problem with knowing an actor is leaving is that it takes away the surprise of it all. Yes, Julian may just leave town, but he could also be killed. Either way, we know WDV is exiting.  Julian bought some time with Sonny by saying he was stopping Nelle and he won't tell about Taggert but it's just a little reprieve. It's coming. 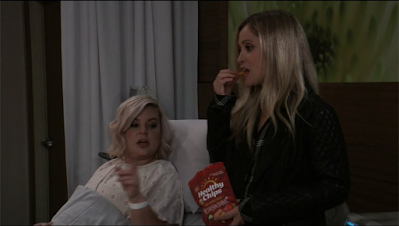 SNACK OF THE WEEK: Ok, so last week it was Franco's chocolate and this week Maxie and Lulu noshed on chips. You know me, I do have a strange like of seeing people eat on soaps. 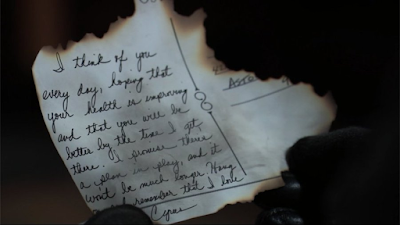 CLUE OF THE WEEK: Jordan, Curtis and Laura all find the house that Cyrus has been using to stash someone. Do they find that someone? No. They DO find an oxygen tank and a love note. I'm betting on Cassandra. She was into synthetic drugs and had a lung condition. Oh, and hello, Laura! Seems like that 40 year old report from the PCPD might be about Laura? (hello David Hamilton?) 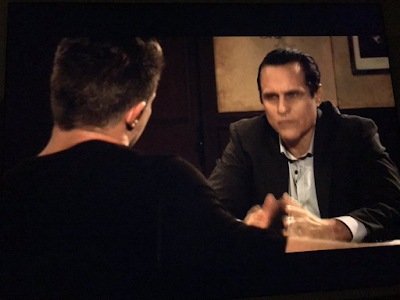 SCENE OF THE WEEK: Oh there it was. Sonny telling Jason about Karen Wexler. Girl he drugged to relax her at his strip club. When Sonny first came to town he was a scum-ball no matter how you slice it. Ergo, hearing about Sasha and Cyrus he had a pang of regret. Jason did try to set his mind at ease but at least we had it acknowledged.

Anna shoots Alex on the boat, Alex slips into the water (dead? doubt it)

Finn codes but is saved by surgery

Anna doesn't tell Peter that Alex is his mother

Sasha suffers an episode after snorting coke provided by Cyrus

Julian lies to Sonny and says he was helping Nelle

Franco tells Liz about his tumor

Dante breaks into Peter's office and copies some files

Ryan is in a coma

Dev gets mad at Joss for not kissing back

I HOPE I haven't forgotten anything! Geesh, a lot did go on. Little Avery appeared and Sonny read her a book which was cute. I think they are setting Lulu up for some danger from Cyrus. Oh, I ran a poll on Twitter: Carly curly or straight hair? 60% went for curly!

By kdmask - November 15, 2020
Email ThisBlogThis!Share to TwitterShare to FacebookShare to Pinterest