Carly figures out about Nelle's necklace. Avery tells her she found it outside the cabin. Carly calls Jax to come over.  She shows Jax the necklace. He says yep. Looks like it. Carly says Jax shouldn't tell Nelle, it was be bad news. Jax thinks he should. Oh geesh. 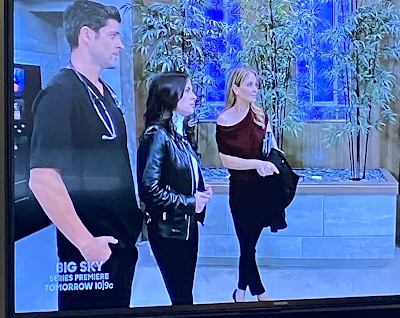 Olivia, Sam at GH. Julian walks in "is it Leo"?? I must have missed something? AND THERE'S A NEW LUCAS APPARENTLY! that's him up there! WHAT? I don't think he'd be a replacement (temp) because why bother to put him in? He's never there. If Ryan DID leave, why not announce the reacast?? Strange???? Anyway a kid fell needs a tetnus shot.  Lucas tells Julian he's a terrible parent basically.

Sasha still on the floor. Cyrus tells Brando to get her out out --so Brando takes her out and calls SONNY?? lol Then at GH, Jason calls Michael to go to see her.  Um, ok? Lucas says she OD and the coke was "super coke" (well something like that LOL) . Cyrus shows up and goes to turn off the breathing machine and Michael hauls him out of the room and yells at him for being a scum drug dealer.

Chase has a beer at Charlie's... Willow texts him "I think we should talk" Willow comes to see him.

Valentin and Tad Martin talking about Charlotte and custody. Val then asks Nina to be her guardian in case anything happens to him.

Brook and Ned talking. The apologize to each other. Brook is still leaving--to "get clarity". And-- I think so the old Brook Lynn can come back.

OMG so, Brook says goodbye to Valentin at the Metro Bar. He walks away and she PULLS OUT A PREGNANCY TEST!!

By kdmask - November 16, 2020
Email ThisBlogThis!Share to TwitterShare to FacebookShare to Pinterest