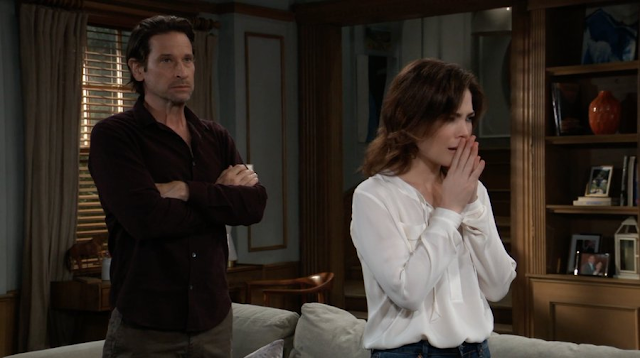 Franco tells Liz about his tumor. She's upset about Terry but he says it was a doctor-patient prive thing. He tells her it's inoperative. Liz wants a second opinion. Franco says he's too afraid he will turn psychotic again.

Brook Lynn is at GH trying to see Finn. Oh, she was trying to find CHase. Which she does and tells him she's got a one way bus ticket to NYC. Chase doesn't want her to go.

Brando is on the look-out for Cyrus at the Metro who's having dinner with a woman "don't let Sonny's wife interrupt us" . Brando is trying to convince Cyrus he hates CarSon.  Sasha is meeting Cyrus. Asks if he sent the coke up to her the other night. She says she know he did.

Nina is talking to Sasha. She hopes she's not using anymore. Then she sees Carly and Jax together. Gets Jelly

CarJax talk about Nelle. Her death was ruled an accident.

SO, I don't know what's up with my TV but I swear at 2:30 it just decides to cut out. I get that wheel thing going back and forth. It's not my wifi as I can use the computer still! I have to finish the episode tonight! I'm sorry AGAIN@@!! UGH I'll see if Wubby Hubby can fix it? I must just reboot the whole thing.

By kdmask - November 12, 2020
Email ThisBlogThis!Share to TwitterShare to FacebookShare to Pinterest