Cyrus and Julian: Cyrus tells him it's time to pay up.  He has the letter from Nelle that Ryan had. Must have gotten it when he had him stabbed. Julian is like: WTF. MAN!!  Then Cyrus tells him to kill Jason. "Maybe like you arranged that car crash your son and his husband got into" OH! SNAP!!! He knows about that too lol Anyway, Cyrus wants Jules to take a package delivery and then he'll get instructions. I guess it's a bomb for Jason. Julian wants to offer

Britt is angry a patient dies over an OD. Jason sees her upset. He goes to talk to her.  She says that GH has had increased ODs since she got there, both coke and opioids. She thinks Sonny is bringing them to town. Um, duh. Don't you know Sonny is a GOOD Mobster? 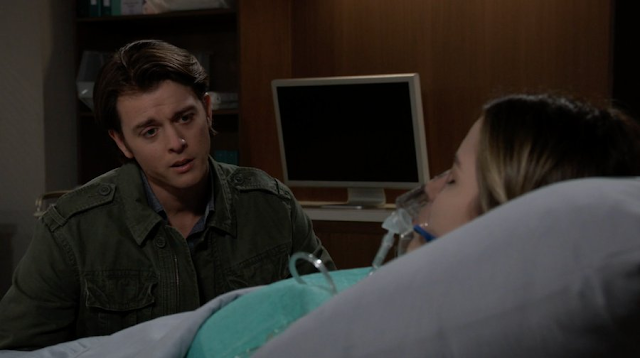 Chase, Michael and Willow talk about Sasha laying in the hospital "How did we not know"??!  Willow and Chase talk. Carly comes in to console Michael. Will she tell him that the whole "sex" thing was a lie? Not so far. Chase comes close...hmmm...

Carly doesn't tell Sonny about the necklace. He tells her about Sasha tho.  Ava and Nik come over to pick up Avery. Sonny talks to Ava about Ryan. He thinks Ava had him stabbed. She's like NO! Nik tells him to leave Ava alone.

Portia is walking about the hospital. Taggert is actually dressed up in scrubs and a surgical hat/mask, spying around. LOL! He can't stay home. Epiphany catches him and hauls him into a room. "What the hell are you doing here"? She yells at him. He says he's protecting people. She mentions her son, Stan! Remember him? She said he got killed in mob violence. She wanted to help Taggert because of it.

Franco tells Cam that he has an inoperable brain tumor. Cam won't accept that. He gets upset and leaves to go study with the kids.

Dev's trying to apologize to Trina and Joss. They are all studying for the SATs. Joss tells him he was a jerk for being nasty to them. Her feelings for him have changed. Cameron wonders what is going on. He says they all need to be friends because it's senior year. They agree.

Nikolas tells Sonny that he had the hit ordered on Ryan.

By kdmask - November 17, 2020
Email ThisBlogThis!Share to TwitterShare to FacebookShare to Pinterest