Friday Gunning for You 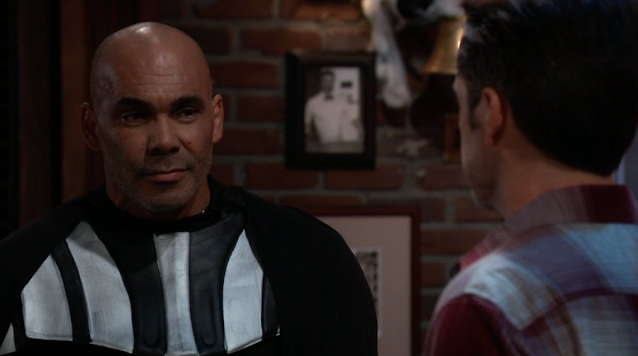 Alex comes to the house as Anna is telling him there's danger. Maxie walks in too! OY! Finn lets Anna know Alex is there with Maxie.  Finn finally gets Alex out of the room to make tea. Tries to hustle Maxie out but her MOUTH ...UGH she 's like WHY?? YOU're SCARING ME... and then Alex comes out with a gun.  She tells Maxie she's taking her on a trip.. then Finn Jumps Alex! Gun goes off..Maxie yells NO!!

Robert and Anna come in the house..Finn is shot on the floor.

Maxie is on the boat with Alex. A helicopter is going to pick them up.

Britt and Jason--the POOL TABLE at The Rib. He gets all his ladies by using the pool table LOL He wants to play Brit. He's getting "closer to her" because he wants to find out about Cyrus. Damn. Then stupid Lulu interrupts. Britt leaves. Jason is like: GOOD GOING LULU. Geesh. He explains why they need to get to Britt. He leaves. Lulu is going to do something dumb like write a story and Cyrus will hate her.

Taggert visits Sonny "have a cup of sugar, neighbor"?? They drink. Sonny tells him Kate Howard was killed and the bought the house so Candy Boy Jax couldn't. They talk about things and Taggert tells Sonny that Julian knows he's alive. Oh lord. Sonny calls Jason and tells him to take care of something. Jason says "I'm on it"

Julian and Ava talk about Ryan. Ryan is still alive. He lost a lot of blood and they aren't sure about his brain because of lack of oxygen. Julian tells Ava he ordered the hit. SHe's like WTF. WHY? He says he's desperate. She's like: When aren't you? OMG!! HE shows her Taggert's phone with Trina and Taggert's photo. Shes' like Julian you are an idiot! That's Trina's Dad. He says: He's dead. Ava's like well...OBVIOUSLY NOT!!  She realizes that Taggert knows Julian was trying to kill Nelle and he'll tell Sonny. Sonny will put 2 and 2 together and come for Jules. She tells him to run while he can.

Sam visits Alexis who's drinking. She starts telling her that Olivia saw her with booze at the Q house around the kids. Alexis tells her not to be such a nag. They yell at each other. Sam says Alexis almost burned down the house when the kids were there...Alexis is like "it wasn't a big deal" Then she says "You sleep with a hitman, that doesn't make you mother of the year"!! oh..BURNNN. Sam tells her she has to go to treatment now. "She will do anything to protect her children". Alexis says: Except leave Jason. Ooooooooo.

Anna rams the boat, gets on with a gun.

Finn is laying in the hospital, whispers something to Peter about Anna and "your mother"

By kdmask - November 06, 2020
Email ThisBlogThis!Share to TwitterShare to FacebookShare to Pinterest