Of the countdown to the WEDDING! Oh yes. Day 8.. lord

Nixon Falls: Jax and Nina . Jax barges in to the Tan-O. MikeSon isn't there of course. He drops Mike's name tho and Nina's all nervous. Jax mentions maranara sauce and says he'll leave her alone if he can meet MikeSon. And.. at one point MikeSon walks right in.

Fingerlakes: Curtis, Jordan and Portia want to talk to the same man about Drew and Naomi's cases. They talk about the cases. OMG SO boRING. They get inside. OMG It's just like the Spencer house and every other rando house they use.. AND the basement door is open. DERP. Jordan goes in. Curtis is in the woods, can't get a signal. Portia is wandering around. Jordan goes to the basement. The owner guy is dead on the couch. Jordan gets knocked out by a guy with a lead pipe. Curtis comes in, guy is there saying he's the owner. Curtis says he knows he's not the owner. They both run. Yada yada, Jordan and Portia get trapped in the basement with the gas on.

Jason and Joss can't find Carly. She's been gone like 20 minutes LOL. I think she's at Sonny's grave or something. Jason calls Spin to find Carly. :eyeroll:  Spin calls. Jason knows where she is.

Trina is at the pool, trying to find out why Esme knew about Kiki's real name. Spencer is like: it's no big deal. Then Trina says it was tacky to see Ava and Esme could be the stalker. Spencer gets all defensive. Esme figures out that Tri and Spence probably had a "thing" together.

Nik and Ava, arguing over the order of protection. Nik shreds it. Ava hired giant goonie guys to bodyguard her. LMAO She takes a phone call. Nik goes to leave and the goons beat him up. She comes out, so upset... she feels badly. Gives Nik the ice pack. Kisses him. COVID Style. 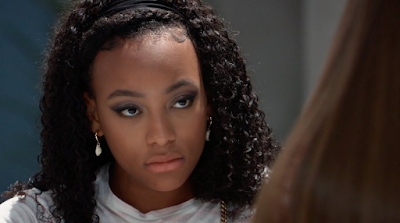 END:
Portia says she can't die, she has to tell Trina the truth about her father (meaning she's Curtis')

Jax says MikeSon and Nina can't be in love, it's a lie

Ava pulls away from Nikolas... tells the goons to drive him home.

By kdmask - September 08, 2021
Email ThisBlogThis!Share to TwitterShare to FacebookShare to Pinterest