Sam and Curtis. She wants to talk about Drew's plane crash. HE tries to get her out of the bar. Why? Oh, Spin and Michael and Jason come in for his "bach" party (just drinks). Sam tells him good luck with the wedding.

Curtis calls Phyllis because she worked at Crighton-Clarke when Nina was there. Wonders if she remembers anyone. She said someone did friend her on social media. 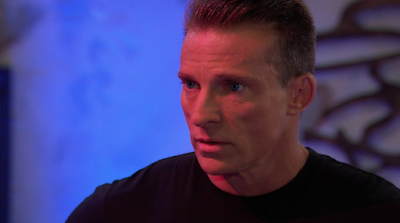 Then Joey Novak comes in to crash Jason's  party. Mikka tries to throw him out, Jason says no, 'we'll leave'... Then Joey is a mouth about Carly and Spin decks him. Dante comes in later and says he might have to arrest everyone.

Olivia and Bobbie planning Carly's shower...over on the pool side, Joss, Sasha and Willow are there. Surprise! Oh I think Brando is going to strip at the Bach party.  I guess he got the job and didn't know it was Carly's party. He strips. He can't dance.

Phyllis and MikeSon talk about Nina. Nina walks in . MikeSon is mad she turned him down lol. Phyllis tells them to live in the moment.
Sonny and Nina talk. He tells her he's in love with her.

Jax goes to Ava to talk about Nina too and her new boyfriend. He's trying to figure out if she knows anything. She says buzz off.. he says he's not leaving until he gets answers.  She says she has no idea about her boyfriend. yada, yada... he's going to take the jet to Nixon Falls.

OMG SO they kept saying the "wedding is tomorrow" BUT THE WEDDING IS THE 17T. That's 10 business days of filler before it EVEN STARTS!! WTF. OMG

Saturday: LOOK for a fun BLOG!! Come here and FIND OUT!

GH Mandated Vaccines for all workers, including actors by October of this year.

By kdmask - September 03, 2021
Email ThisBlogThis!Share to TwitterShare to FacebookShare to Pinterest