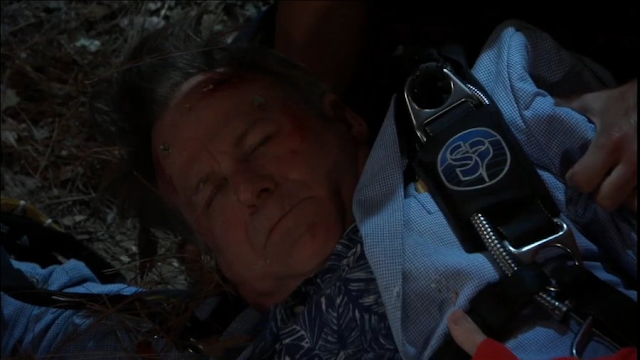 GH this week was up and down. DOWN DOWN DOWWWWN!! You know why? Yep, we had Baldwins falling from the sky! (There's a lawyer joke in there somewhere)!  Since it was camping themed, grab your s'mores and cozy on up. 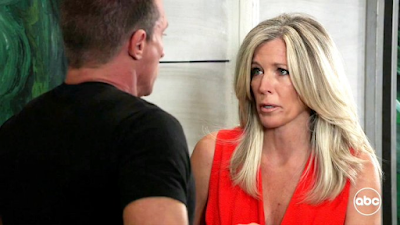 ELEPHANT IN THE ROOM: Oh there's always one!! This week goes to the dialog writers who kept dropping the fact that Jarly's wedding was 'TOMORROW". They said it on Friday. That means that we have 9 business days before the wedding even starts. STARTS. What the. I mean I know time moves slowly but come ON!!! Is the day/morning of the wedding lasting TWO WEEKS? Can I Last that long? UGH. 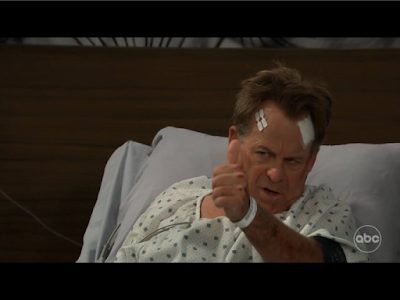 HEAD TRAUMA OF THE WEEK:  Man down!! Right smack dab in the middle of Finn and Liz' camping trip!! Just when they were about to plant one on each other, he crashes down. Now, a lot of people on twitter hated this. I of course...loved it. So "campy" and SO GH. LOL. So 1980s. Anyway, Scott got thrown out of the plane by some goons and they took the time to put a parachute on him--and open it! He's bumped and bruised but not too badly. He did tell Liesl he loved her before they passed out. Gah! 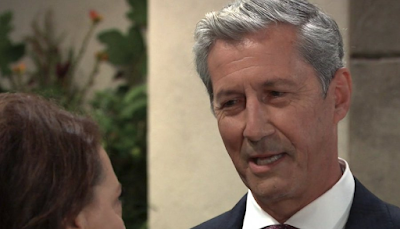 LOVE SHACK of the WEEK: Oh, poor Liesl... she's being held captive by... VICTOR CASSADINE! Played by  Charles Shaunghnessy  I like it!! He's dashing, the right age and I was just very pleased. The whole "prison bedroom" is over-used however and her being in her satin PJs? Sigh. BUT!! Intrigued! This will all tie in with Drew, Peter and that mystery woman (Hayden??) 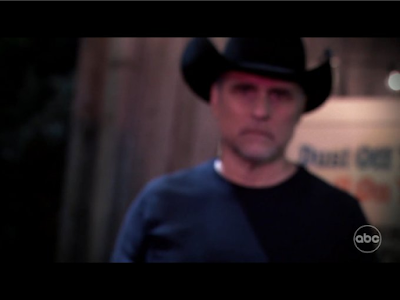 FLASHBACK OF THE WEEK: After Jax eats Josslyn's appetizer and she swoons over the sauce that 'tastes like Sonny's", he flashes to seeing him when he was in Nixon Falls. Putting the pieces together months later, he figures out that Sonny is probably Nina's secret boyfriend. Will he go find "Mike"? Will he confront Nina? Stop the wedding? Well, we have 2 weeks to find out! 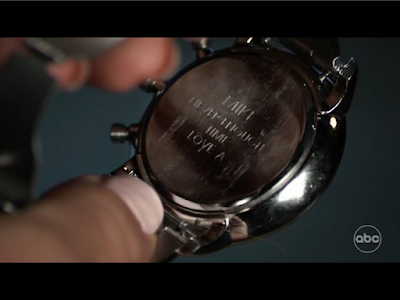 CLOCK-BLOCKER OF THE WEEK: Oh that watch of Sonny's! Just when he and Nina were in the bedroom ready to rumble, she sees this and freaks the hell out.  MikeSon can't believe he was turned down (with these dimples????) and pouts. Nina's feeling guilty and pushes him to 'find himself' before she can come to him fully. :wink: 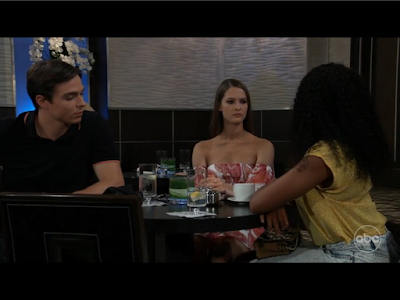 SLIP OF THE TONGUE OF THE WEEK: I'm saying it: Esme doesn't grab me as either a vamp or a rich bitch. Nope. No inflection, no flair, nothing. She could totally be Willow's long lost sister from the Prairie.  The only reason I'm mentioning her is that she got Nik and Spencer together by telling Spencer they needed the money and she called Kiki "Lauren". This will be important down the road. 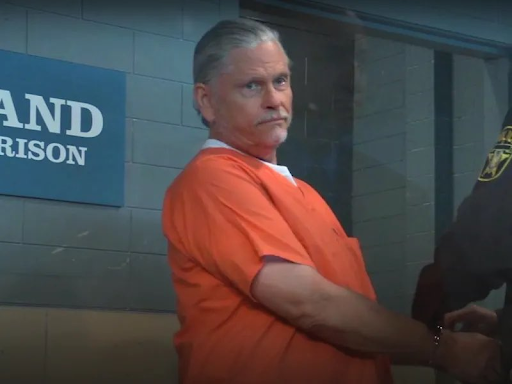 RETURN OF THE WEEK: Yeah! Cyrus! I wasn't sure we'd see him so soon. I'm happy. Like Jeff K.  He's also making trouble at the Jarly wedding. Here's hoping Gladys carries the bomb in her gift package. 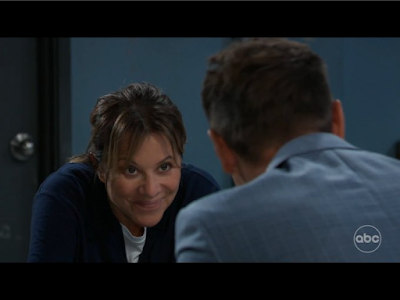 SCENE OF THE WEEK: This has to go to NLG and if you know why, you know why. If not? Let's just say she's playing opposite someone that was pretty nasty on social media to her. Combined that with the fact they are polar political opposites and... well, you get the picture. She was stellar in this scene for her delivery and sheer acting power.  A ton of things were said with the eyes. Loved it. 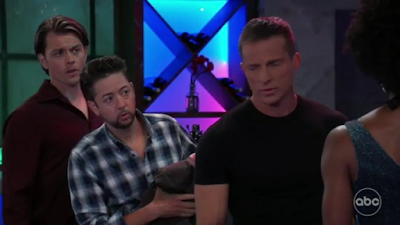 SHOWER OF THE WEEK PART ONE: Yes, I'm calling Jason's "party" a shower because I think the only point of it was to have Spinelli smash Joey Novak's face after he disparaged Carly. By the way, it's a wonder they didn't order malted milk.  PS I do like N'Neka the bartender. More please. 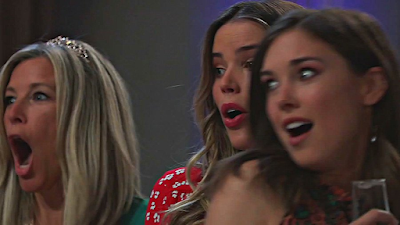 SHOWER OF THE WEEK TWO: Yes, Carly had one. Yes, Brando was the stripper. No it wasn't exciting. He kept his black giant panties on. So... 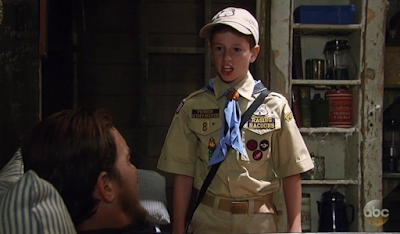 WUBS HIGHLIGHT OF THE WEEK: The Boyscout Wyatt. Sorry, I love that little sprite just turning up rando here and there in the woods. He's like a gnome! Plus, he's Sam from OLTL. I want him to be Austin's nephew.  All I could get was an old pic when he helped Peter back in the day! 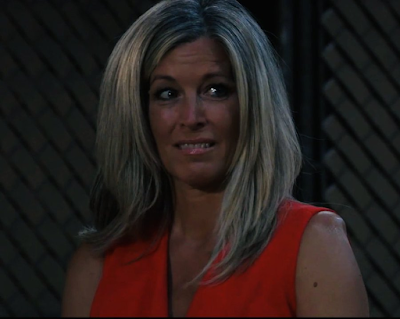 FACE OF THE WEEK: Carly reacting to Gladys telling her she's Novak's plus one!! "I'll have the chicken...no the fish!! No! The chicken"!!! Loved a drunk Gladys. 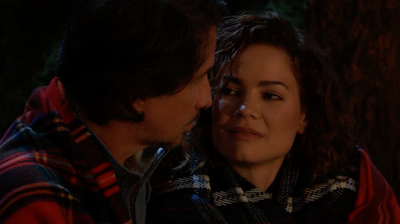 Carly has a shower with a stripper (Brando)

Ava decides to leave town but isn't quite out yet

Camping turns into falling objects when Scotty drops from a plane

Brando stripped for the ladies

Jordan and Shawn decide to work together to catch Hayden's shooter

Gladys gets invited by Novak Sr. to the Jarly Ball; wants chicken

Oh, Finn knows how to pitch a tent. 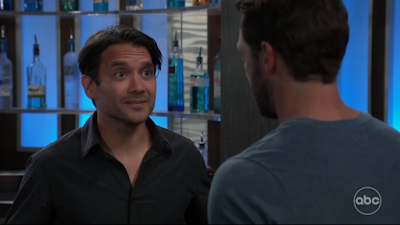 NEWS OF THE WEEK:  The big news is.... Mandatory Vaccines on the set of GH by October. Oh boy oh boy! Some actors have made themselves clear on this subject. What will the fallout be? We will be watching the behind the scenes social media play out!!

NO new GH Monday because it's Labor Day 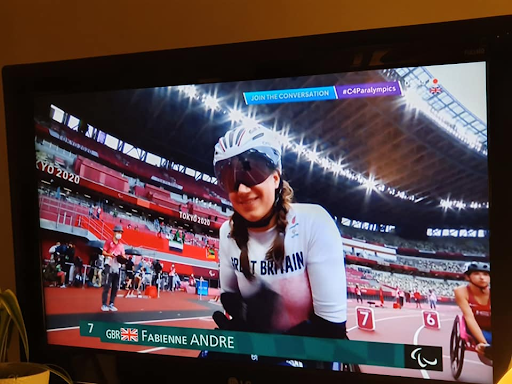 My husband's cousin, Fabienne Andre came in 4th out of a field of 9 in her wheelchair race at the ParaOlympics in Tokyo Friday!!  She's just amazing. 22 years old and until two years ago competed at swimming. :Clapping:

SPOILERS:  The only one I'm really interested in is that Austin will be looking at little Leo in a diagnostic light. I think Olivia will be in denial but Ned already suspects something. Other stuff is that Portia finds out a secret and Britt looks for her mama. 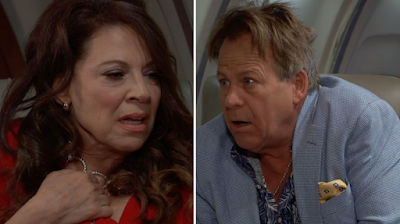 That's a wrap! GH was watchable this week and for me, lover of old soapy crazy, it was a hit. As someone mentioned on twitter, there was a big "Miss" of the week and that was not having Molly at Carly's shower to watch Brando strip!! Dang it. And Kristina has all but evaporated. You finally have a Bi Character on and...she's gone? I can't believe it's going to be two weeks to the wedding and they are going to play the days out like this. Is every day and hour to the wedding? I don't know. They should have saved the showers. I don't get it. Hey, Peter wasn't on. yippee.
By kdmask - September 05, 2021
Email ThisBlogThis!Share to TwitterShare to FacebookShare to Pinterest