JAX IS AT THE JAIL!!!!! WITH NLG!! Mortal Enemies!!! A line of his is "I think I'm right but what if I'm in the wrong here" ... PFffffffft. They talk about his situation (ie should he tell...to save someone) he never names names. BUT she says "From on fixer to another, walk away".

Trina tells Jax on the phone that she got the sauce at the Tan-O. Ava says goodbye to Trina. Trina cries then they talk about Spencer and Esme. Ava tells Trina to go find Spencer.

Don't like casting for Esme. She's just not ESSSSSSSME enough. Nikolas tries to reason with Spencer. Spencer isn't having it. He gets up in a huff. Esme goes after him. She reminds him that they need MONEY to live their lifestyle LOL

Anna is talking to Jordan and Britt about Dr. O. Britt is upset. Oh, the boy scout brings the locket to Britt. She shows it to Scott. He says Dr. O had it when they were going down. They talk and talk. Britt finds out Scott had chloroform in his bloodstream. Anna gets an alert from the WSB. 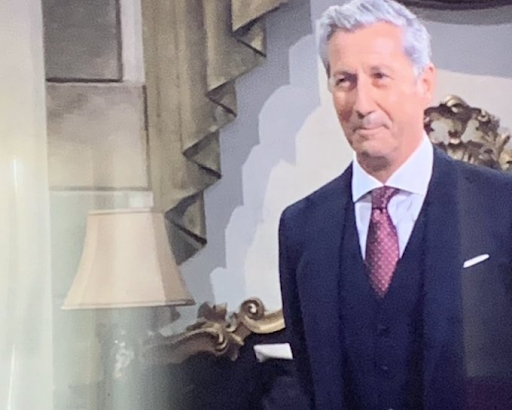 Dr O wakes up in a room and dressed in silky PJs ...she's locked in. Tries to stab the butler but a goon grabs her.  She thinks Peter has her and it's VICTOR! we were right.. Mr. Nanny Sheffield is playing Victor Cassadine!!  He tells her he threw Scotty off the plane but he had a parachute. He grabs her and says his heart is beating for HER.

Jax goes to talk to Ava about Nina

By kdmask - September 02, 2021
Email ThisBlogThis!Share to TwitterShare to FacebookShare to Pinterest