CYRUS!! He talks about Carly and Jason. Says Carly is a liability. Cyrus wants the Five Families to use the wedding as a venue to strike. They'll all have alibis.

Gladys is with Novak and he's wondering when Jarly got together. She says right away although Jason went with Britt for awhile. Gladys is trying to get invited to the wedding.  YES! He invites her to the wedding!!

Joss and Jax eat Sonny's sauce on the mozz sticks.  She talks about he and Carly fighting.  They taste the appetizer. Joss gets a funny , sad look on her face. He asks about it. She says that it's just like Sonny's and it's smoky yada yada.

Nina and Sonny. She sees he got spag sauce on him. Wants him to take his shirt off. Oh they end up going into the bedroom. Her hair gets tangled in his watch. They take it off and she sees the inscription. She says she can't do this.

Carly and Jason hug, Britt sees it. Britt wishes them the best (GROSS). Carly leaves. Britt and Jason talk a bit, then she meets her date (just some rando guy). 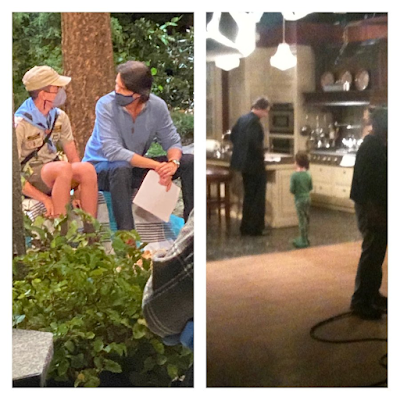 Liz and Finn almost kiss and see something fall from the sky. OMG IT'S SCOTTY!! AHAHAHA with a parachute..knocked out on the ground!! LIz is like: SCOTT!!!???? and IT'S SAM FROM OLTL as the boyscout again! (He found Peter back when) OMG. I LOVE that kid. He's just out in the woods and helps out. THey go to GH Scotty wakes up and says "Are we there yet"? Jordan is called and asks him what happened. He is asking where Liesl is...

Sasha and Brando talking about a date at his garage. Then they talk about moving in together sometime. He says he's trying to make more money by 'side gigs" just then Carly walks up to talk to him. Ut Oh, Sasha going to think he's working for the MOB again!  Sasha goes to pee and Carly talks to Brando.  Brando says he kept a coded notebook AHAHHA. OMG Okay.

Jax flashes back to seeing Sonny when he was shot.

By kdmask - September 01, 2021
Email ThisBlogThis!Share to TwitterShare to FacebookShare to Pinterest